Happy new year all! In the spirit of Veganuary, I thought I would start the year off with something a bit different from my usual posts. In the hopes of helping anyone who is new to veganism, interested in cooking more plant-based foods, or just plain curious about what on earth we eat, I thought I’d share a series of tips on issues around vegan living. I know the question of how to cater for family and friends when you’re vegan can be one that comes up a lot, so with that in mind, read on to find out how I threw a vegan dinner party for my friends a few months ago…

So it’s a little cheeky of me to say I held a dinner party on this particular occasion, as my lovely friend Lucy recently hosted one for our group of friends. This was the third vegan dinner party that we have thrown in the last nine or so months, with me being the only vegan! I’m very lucky that my friends are all open-minded and up for trying new things, so when I suggested throwing a vegan pot luck dinner party at mine almost a year ago now, despite at least one person claiming she’d ‘never cooked vegan food’ (definitely not true! haha) they were all very up for the challenge.

My Mum had a couple of ‘Murder Mystery’ party boxes at home which she was going to get rid of, so I took them off her hands. I’d mentioned this to my friends who were intrigued and here we are having had three parties so far, with a fourth in the calendar. I assumed that everyone knows what a murder mystery is, but judging from some of my work colleagues’ reactions when I told them about it, that might not be the case – I guess it is a bit of a throwback to decades gone by and I’m not 100% sure if they are still made! Essentially, you’re given a theme (e.g World War 2 or Swinging 60s), each person is allocated a character, and everyone gets dressed up accordingly. One of the party-goers is told they are the murderer, and has to try to keep it to themselves by deceiving the other attendees, all of whom are trying to figure out who the criminal is throughout the evening. I might not do it justice but whether you stick to the game or not it results in a lot of laughs and good fun. Whether it’s a murder mystery party, or something more up your street, I think something like this can be such a fun way to enjoy a meal at home together, with everyone contributing something, and having a theme can help people with a starting point for the sorts of things they could cook.

At Lucy’s recent dinner party, my job was to prepare the starter, and I made the slightly risky choice of picking two recipes that were completely untried and untested, which I found online by searching Google for ‘Indian vegan starters’. I might suggest that if you have less open-minded friends or aren’t particularly confident in the kitchen, it’s a better idea to choose a recipe that you know is going to come out great. However, I planned to make marinated vegetable kebabs, to be served with spiced chickpea and rice balls. I was hoping to arrange them in some kind of attractive way on the plate, but ultimately the kebabs were taking too long to cook so I pulled all the pepper and mushrooms off the skewers and fried them in a pan. We filled two large bowls with the rice balls and veggies and put them in the middle of the table so everyone could dish up for themselves. This left the plating to be pretty ‘rustic’, but that was fine for our purposes! I thought I had drastically overestimated the amount of food for a starter but everyone was pretty hungry by this time on a Friday and everything disappeared. The rice balls were a little bland for my tastes and I probably wouldn’t make them again, but they were fairly quick and easy to make and seemed to satisfy everyone, so I’d call it a reasonable success. I would have liked the curried vegetable mix to have looked a bit more presentable too, but the marinade was very tasty.

Lucy cooked a creamy butternut squash and sweet potato curry for the main, which was absolutely delicious, and accompanied by onion bhajis, saag aloo, mango chutney and poppadoms courtesy of Hannah. It was such a comforting meal to share on a wintery evening with friends, I could eat it all day. To finish off, we each had a huge piece of raw chocolate brownie made mostly with nuts, coconut oil, maple syrup and cocoa powder. It was very decadent, served drizzled with an indulgent, rich, warm chocolate sauce. I think most of us wrapped half of it up to take home for breakfast the next day as it was so rich. Certainly proof that vegans aren’t missing out on tasty treats!

Playing out the mystery and enjoying three courses (and snacks) takes a good three/four hours, meaning you really get to take the time to enjoy the company and the food, and have a lot of laughs. Particularly when one person has to play two characters and distinguishes the two by doing a deeper voice and putting on a different hat… I think the dinner parties we’ve had have been such a fun way for friends to discover how easy to cook and tasty vegan food can be. Hopefully if you have friends as cool as mine you can try it! Let me know in the comments if you do 🙂

Suggestions – our other menus 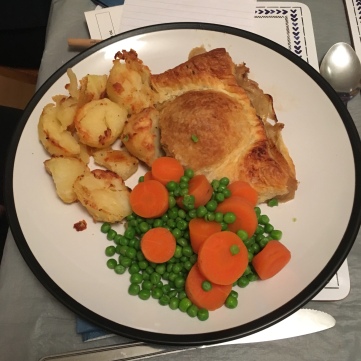 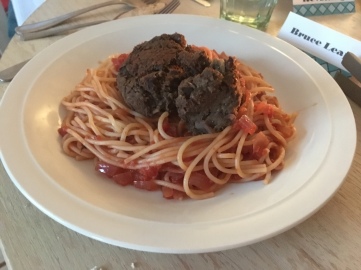 Photo dump from my long weekend away with family 🏖 swipe for puppy cuddles! 🐶
Dreaming of @doughnuttime_uk 💭
*Finally* got myself the @wasabi_uk zalmon sushi set [a d\p r ] 🍣 SWIPE for a closer look 🥢
Spicy fajita mix with tofu and homemade wedges 🌶 such a quick meal to make on a weeknight, definitely recommend! 😋
The classic overnight oats 🥣 made with @thecollectiveuk fudge Greek-style yoghurt (ad-pr sample) Genuinely don’t think I’ll need to buy any other dairy-free yoghurt again because theirs is so so good 😋
Throwback to when @greenroutescafe had their Burger Shack 🍔 sadly no longer on the menu but their food is still 👌 please tell me you’ve been??