You might notice a theme over my next couple of posts and as you come to know me, or those who already do, will know that I can’t resist a piece of cake. That being said, when Isabelle from The Rosehip Bakery approached me asking if I’d be interested in sampling one of her vegan celebration cakes, I had to attempt to be a bit restrained with my response. Her message came at the ideal time, as my younger sister’s birthday was coming up, and she’s also vegan, so I thought this would be the perfect surprise for when she came for a daytrip to Oxford on her birthday weekend. I didn’t have anything too specific in mind for the cake so gave Isabelle a couple of hints, ‘chocolate’ and ‘pink’, and was looking forward to seeing what she came up with.

I don’t need to say too much because the pictures speak for themselves, but when I collected the cake the night before, I was so excited when Isabelle lifted the lid of the box. She’d masterfully baked and decorated a layered chocolate sponge drip cake, covered in a bright pink buttercream icing with dark chocolate dripping down the sides, topped with all manner of vegan goodies. Strawberry bonbons, cookies and cream biscuits, a dark chocolate bar, white and milk chocolate buttons, and lots of pink sprinkles and glitter. She’d even made some gorgeous pink vegan macarons using aquafaba (the brine from a tin of chickpeas, which perfectly replicates egg whites when whipped)!

After a day out in Oxford, we returned home for tea, cake, and candles. When we cut into it, three gorgeous layers of rich chocolate cake were sandwiched with pink vanilla buttercream. Isabelle told me she had adapted one of her brownie recipes for the layers, which meant they were extra decadent. The cake was incredibly rich and the amount of icing on top was generous so it only took a small slice to fill me up, especially along with nibbling on some of the toppings. Lucy was left with comfortably more than half of the cake to take back to university with her to share with her friends. 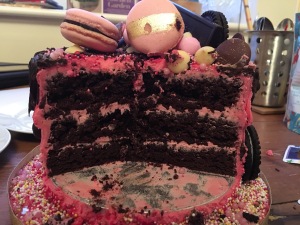 Lucy seemed like she absolutely loved receiving the cake as one of her gifts and it added something really special to her first birthday as a vegan, having taken part in Veganuary at the start of 2017 and not looking back. Usually my Mum or Dad would make her one but they aren’t too practised at vegan baking yet so it was nice to be able to celebrate without the hassle, especially with something that looked and tasted so beautiful. 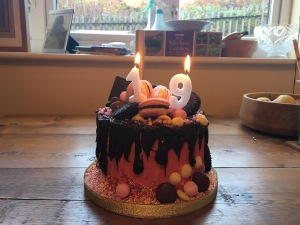 Isabelle, a vegan herself, told me she tends to spend most of her time making wedding cakes and favours, but a glance at her website shows she can put together cakes for any celebration or event. I know I’ll be keeping her in mind for any occasion which requires a creation a bit beyond my own baking skills from now on!

Disclaimer: The Rosehip Bakery provided me with a small celebration cake free of charge. This post shares an honest account of the product.