This week I had the opportunity to visit Quod on High Street for a meal with colleagues (apologies in advance for the dark photos as I didn’t feel I could spend hours sorting out the lighting)! Quod is somewhat of an Oxford institution, set right among the colleges, with the menu focusing on fresh, British produce. They change their menu seasonally, and due to the dining situation, I called in advance to double check there would be something vegan on the menu to avoid any awkwardness. They confirmed that they always include one vegan option for each course, so I crossed my fingers that it would be one I liked the sound of (and ideally, not a salad). I was there for the meal straight from work, still in my shirt and smart trousers, and at 6.30pm on a Friday the place was fairly quiet, but the other diners consisted almost exclusively of people in suits and ties. It’s definitely a place with a slightly less than casual vibe. We were made to feel welcome and the service was excellent, but I would probably feel out of place here in my jeans and a sweatshirt.

With only one main course to ‘choose’ from, I went for the warm spring vegetables, served on a bed of pearl barley. I double checked that this meal was dairy-free, and the waiter confirmed that they would cook it fresh in the kitchen and could be made with olive oil. Our meals didn’t take at all long to come out, and I was presented with a pretty looking plate of a risotto-like pearl barley mixture, topped with the chard, cauliflower, baby carrots and leeks, and fennel shavings, with some baby green leaves. The al dente veg was all perfectly cooked to my liking, and the seasoning was also spot on. The plate was definitely full of flavour, warming and hearty, but at the same time it felt healthy and nourishing. 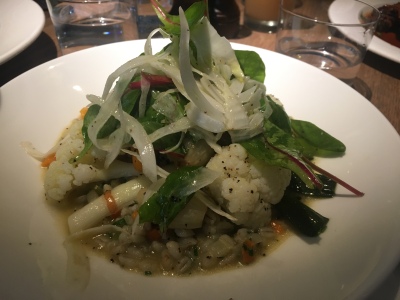 For dessert, there were a couple of sorbet-based options, and I went for the rhubarb. I was happy to see this on the menu as I’m a big fan, and the vegan pudding is quite often some kind of dark chocolate based tart, so this sounded lovely and refreshing in comparison. You may know I don’t love sorbet on its own as a dessert, but at least this came with poached rhubarb. I asked the waiter if he could confirm that this was definitely vegan, and after checking with the kitchen, he came back with ‘so the rhubarb is gluten free… dairy free, vegan, it’s everything basically’. Looking past the fact that I just don’t understand why people think gluten-free and vegan are remotely similar things, I was happy to be able to order the dish. What arrived was a fairly generous amount of rhubarb with a small scoop of sorbet, and I thought it was the perfect portion size to round off the meal. I’d half expected the rhubarb to be still warm but the whole dish was cold and it was slightly awkward to eat with only a fork and spoon, as the rhubarb slices were definitely too big to eat in one go (unless there’s some specific etiquette to eating rhubarb this way that I don’t know about)? That said, I really enjoyed the pudding, it was a delicious balance of acidic and sweet. It led me to think I might even possibly order a rhubarb sorbet on its own if I saw it on a menu elsewhere, unlike the regular mango or raspberry sorbet usually on offer which I’m not remotely interested in. 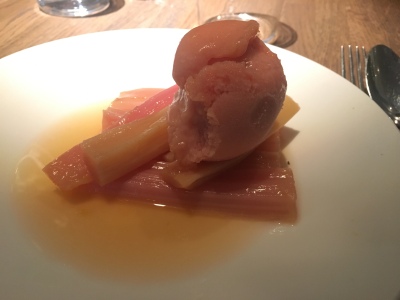 Having not really considered Quod as a place to go before, with its upmarket vibe I had always just assumed it would be pretty expensive. Admittedly some of the menu was (i.e. the meat dishes), but not overly so, and I thought my own meal in particular was very reasonably priced – especially considering some restaurants I’ve been to that charge the same amount or even more for food that’s not even freshly cooked. The waiters seemed really knowledgeable about the food in general, as one of our party was also gluten-free and they were happy to advise which items on the menu she could eat. When they weren’t sure about something, they were confident to go back out to the kitchen and check, rather than just bluff their way through, which I appreciate. Overall the meal was very enjoyable. With there only being one vegan option, I know that might put some people off from visiting, and I wouldn’t rush back again until they refresh the menu, but I would certainly consider going back at some point.