You probably wouldn’t expect to see a review of a restaurant like Beefeater on a vegan blog, and I know that a lot of readers might avoid a place like this at all costs. However, as my aim is to make veganism as easy and accessible as possible, I thought it was worth including. Many families, including mine, aren’t completely vegan, and it can be good to have options for places to go out that will cater for everyone. My family recently visited Oxford and as we’d had some 40% off vouchers through the door, including a promotion of the new vegan burger, we thought we’d try it out. With The Longwall also being not too far from my flat, and having parking, we decided it was a convenient spot to go for lunch. 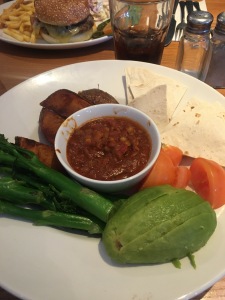 The Beefeater obviously doesn’t have an abundance of vegan options, but it has a couple of things to choose from, and the labelling on the menus is very clear. I decided on the Chilli-Non-Carne, which uses a mixture of lentils and soya mince. It sounded quite nice being served with avocado and wedges on the side. When it arrived, the chilli was served in the tiniest bowl imaginable, with the additions on the side in fact making up far more the bulk of the meal. The ‘fresh tomato’ was one very watery and bland quartered salad tomato. The ‘baked tortilla chips’ were actually just floppy pieces of tortilla wrap sliced into triangles, which had definitely never seen an oven. The tenderstem broccoli had a really funky taste to it, like chemicals had been spilt into the water they were boiling in, and I couldn’t eat the stalks. Admittedly they were generous with the large half of an avocado, and the crunchy potato wedges were tasty. The chilli itself was also actually very nice, with a sweet and rich tomatoey sauce, and good texture. It’s a shame they couldn’t have replaced the sides with more of that! 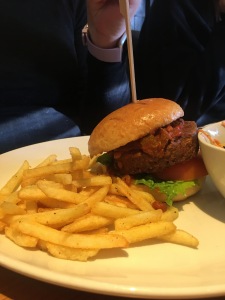 My sister ordered the ‘vegan sloppy joe’, made using the Beyond Burger. It’s served in a brioche-style bun, topped with a minuscule amount of the chilli. I wonder if they had almost run out of it for our visit or something because it can’t cost that much to produce and they were being very stingy with it! You can’t go too wrong with a Beyond Burger so it wasn’t bad at all, though not particularly exciting. The draw for my sister was that they do bottomless chips, so she ordered another bowl seconds after they’d placed her full plate down. There’s a small token salad served on the side of the burger which didn’t look particularly edible, and is probably just put on the plate to make the meal look bigger.

We got exactly what we expected from the meal. It wasn’t great quality, but with the 40% off voucher, the whole meal for 6 people came to around £60, which was really reasonable as we all ordered drinks – which also come with free refills. If your family are going to drag you to Beefeater, you won’t go hungry, but I’d recommend taking a voucher so that the meal doesn’t end up outrageously expensive for very mediocre food.