I finally got to try the food at Syrian restaurant The Pickled Walnut on Cowley Road for a friend’s birthday, with it having been on my list of places to visit for quite a while. He kindly opted to go there as it had seemingly lots of veggie options, although I think it probably wouldn’t have been his usual first choice! Happily, the food was fantastic, and everyone seemed to really enjoy their meals (although my boyfriend, Jamie, said he actually preferred my vegan option to his meat dish – score!). 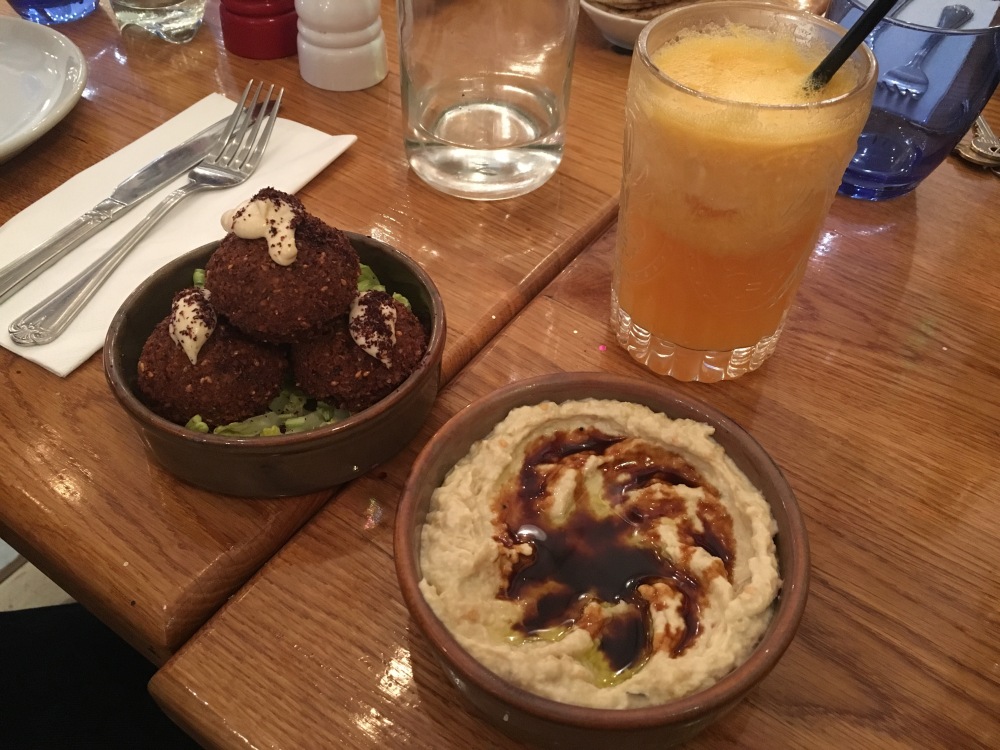 Shortly after we’d been seated on some interesting squashy stools round the table, our drinks orders were taken. I went for an apple juice, which I ended up being charged £1 more for than was listed on the menu. I didn’t mind because when it came, it was freshly squeezed, and tasted quite different from the standard juice that comes out of a carton at an incredibly high mark-up at restaurants usually. The waitresses were attentive at topping up a bottle of tap water for the table, and getting more drinks if anyone wanted any. 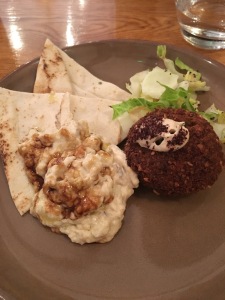 Jamie and I shared two starters, both of which were heavenly. Jamie went for falafel as he’s not super adventurous, and I chose the mutubal, which was described as burnt aubergine with tahini. I ignorantly expected it to be chunks of grilled aubergine with some tahini dip on the side, but when it came it was actually just a dip blended to a similar consistency to houmous. Both starters were a very reasonable size. We were completely won over by the smoky dip, Jamie tried a little bit at first but ended up definitely eating his fair share, it was so tasty. The falafels were some of the best I’ve had too. There were so many other vegan options that I’d love to try next time! You could easily go here for a tapas type meal selecting just from the starters.

All five of the vegetarian main courses on the menu are vegan. There was also a veggie kebab mixed grill on the other main courses section, which without the halloumi would be totally fine as well. Someone else in our party ordered this, it looked amazing, and she said it tasted great too. I took a really long time to decide what I wanted to order for my main course, but ended up going for the fasoulia: french beans with a tomato sauce and a side of rice, which the waitress recommended over the bulgar wheat for this particular dish. It arrived as a big bowl full of tomato sauce with a huge mound of green beans and pomodorino tomatoes, with a separate bowl, also decent sized, for the rice. I ended up leaving about a third of it because there was just too much food! It’s a simple dish, but done really well. The sauce was amazingly rich, sweet and garlicky, and everything was cooked nicely. This is the sort of meal I’d never really think to cook at home but I’d happily eat like this every night! I’m really keen to go back and try some of the other dishes as they sound similarly delicious. We weren’t offered a dessert menu, so I think they really focus on the savoury dishes here, which was fine by me – I probably would’ve made myself feel ill if I’d tried to eat any more.

My meal came to around £17 for the two courses with a drink, so if you’re on a student budget, this might be a place to come for a special occasion, and I think the food and atmosphere makes it well-suited for this. Our waitress was brilliant, when I asked to begin with if any of the vegetarian mains were dairy-free, she responded straight away ‘they’re all vegan so you don’t need to worry about that’, and she was happy to make recommendations to our table about what was good on the menu, as well as alternatives when they didn’t have a couple of the items available. She didn’t get annoyed when we took forever about ordering our mains and changing our minds, which is always nice! This feels like the perfect place to come for a summery evening meal, perhaps after graduation, but I’d recommend trying to find an excuse to visit at some point no matter what!

One thought on “Vegan Review: The Pickled Walnut”