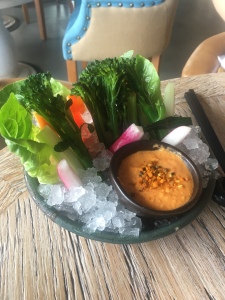 Thanks to the lovely Tilly at That Oxford Girl, I was invited to try out Victors over summer, a Hamptons style restaurant on the rooftop terrace at the Westgate shopping centre, with a couple of friends. I’d heard mixed things about the restaurant. I’ve received messages that they weren’t very accommodating for vegans, even when called in advance, and people have been under the impression that there is only one vegan dish on the menu.

Having said that, I can’t really fault the evening that me and my friends experienced. We were given a nice table in the window (not outside, where it was still a bit too hot, but just inside next to the wisteria with a breeze and lots of natural light). My friends were running a little late and in the meantime I was seated and offered some water for the table. I was talked through the vegan options on the menu – which ones were already vegan, and which could be adapted – and brought over an allergen menu to have a look at too. This definitely contrasted to what I’d heard from other people!

The waitress had to come back three times before we were finally ready to order (the curse of indecision). I had decided to pretty much go all out and try one of everything vegan on the menu. With that said, Victor’s does have only a few vegan dishes, and I thought I’d probably have to order a couple of the same thing if I wanted to feel full by the end of the meal. My friends aren’t vegan so ordered a few other bits to try, and after we’d finished reeling off all of our choices, we kind of asked each other if we’d missed anything, and the waitress cut in with ‘I think this is enough, you’ve ordered enough. Why don’t you go with this and see if you want to order anything else after’. After she’d gone, we cracked up laughing (ah, the judgement) but I understood she hopefully wasn’t meaning to be rude, she just figured we hadn’t eaten there before and weren’t sure what the portion sizes were like. 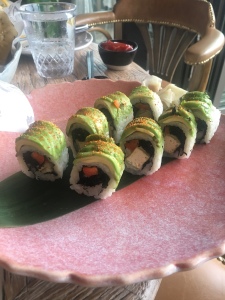 We ordered a few of the ‘while you wait’ dishes as we were quite peckish by the time we’d decided what to order. These were the first things to come out, but the rest of our food came out so quickly that we had hardly finished a few bites, and our table quickly began to get full. The crudites on ice were presented very prettily, and the houmous had a nice heat. I know it’s only a couple of veggies but for a nibbly kind of dish I felt it wasn’t overly expensive. We also had a couple of bowls of flatbread which came with a little bowl of guac and salsa. The ratio of bread to dip probably wasn’t quite right for me, but the dish was really tasty, and I am totally a fan of just eating plain bread when it’s good. My friends ordered the zucchini fritti, which the waitress had told us was vegan, but the allergen menu said otherwise, so I decided it was better to be safe than sorry.

I’d been told bizarrely that the beef rolls could be made vegan, filled instead with some mushrooms, peppers and veggies, so we ordered two full rolls of the vegan version of these, as well as one full roll of the avo and tofu. Both types of rolls were light and refreshing, and despite being someone who isn’t a huge sushi fan, I could happily get on board with these. As you’d expect, everything was perfectly presented on the plate – it’s a very Instagram-worthy location!

I also ordered a grilled avocado small plates (specifying I wanted the vegan version as I think it usually comes with mayo) and this tasty little bowl came with roasted tomato, grilled tofu & a couple of slices of avo, topped with a corn taco. The texture and flavour combinations were perfect. On the side, we had a bowl of ‘Victor’s Fries’ which are topped with truffle oil and a sprinkle of nori. Perhaps I’m not posh enough, but I would’ve probably been happier with plain fries without the toppings, as they were perfectly crispy, with the right amount of salt.

I must admit we maxed out on our budget and on our waistlines and didn’t feel the need to look at the dessert menu (my friends had ordered a few other non-vegan dishes for themselves in addition), but I don’t think there is much going on for vegans there. If you, like me, feel a meal isn’t complete without finishing it off with something sweet though, perhaps it’s a good excuse to try one of their cocktails.

It’s one of the more pricey options on the rooftop terrace, as our meal came to about £35 per head for us to be comfortably full. Although there were definitely more vegan-friendly dishes than I expected, the choice is still fairly limited (and very avo heavy!), so it’s not probably not somewhere to visit regularly unless you loved those plates so much that you’re happy to eat them over and over. Overall though I am glad to have got the opportunity to enjoy a meal at Victors, the service was wonderful and the food was excellent. It could be a nice place to try out for a special treat – perhaps a graduation or something like that, or if you’re not too fussed by the food, you could just go in an evening to enjoy the environment and have a drink at the bar.

We dined as guests of Victors, courtesy of That Oxford Girl. All views are my honest opinion of the experience.