This post is a little different and one which I hope people all over the UK will be keen to read! In January, M&S launched Plant Kitchen, its new vegan range numbering 50+ ready meals, ingredients, and grab and go options. M&S shared a generous handful of their flagship options with me to try out at home and share my verdict. 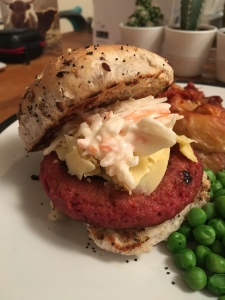 As part of the range there are a few different burger options to try, including your typical veggie burger made with chickpea and sweetcorn, an imitation meat burger, and the ‘beet burger’ which comes somewhere in between. We tried the ‘No beef burger’, a typical soya patty which is the closest to your meaty fast food option. It definitely looks like it in the pan, as it ‘bleeds’ while you cook (I know for some people that’s offputting so it’s worth mentioning). When you cut into it the texture is quite fleshy too. The burger itself didn’t have loads of flavour to it, though the chargrilled bits that had caught in the pan were more flavoursome so this might work well on a barbecue. There are so many similar vegan burgers on the market that at £3 for a pack of two, these wouldn’t necessarily be my first choice. However, I’d say taking a trip to M&S would be worth it for the accompaniments, and let’s face it while you’re there it’s probably just convenient to pick these up too. We topped our burgers with their new vegan coleslaw and its little additions like this, which as a vegan you’d typically just forgo, that make a meal such a treat.

I hadn’t had coleslaw since going vegan so it’s been a while but my boyfriend said this one is literally indistinguishable from the non-vegan version. It’s fresh and has the quality you’d expect from all M&S food, all of the crunchy carrot & cabbage is shredded neatly. I would absolutely go out of my way to buy this, and I’m secretly hoping there are non-vegans up and down the country who accidentally pick this up and are none the wiser.

Alongside our burgers, we cooked the ‘dirty fries’,  an incredibly indulgent tray of thick potato wedges topped with a beschamel style sauce, tomato sauce, and vegan cheese. Before it goes in the oven it doesn’t look the most appetising, but when it comes out, it looks and smells heavenly. It tastes like a lasagne made with potato instead of pasta. The beschamel is super creamy, the tomato sauce is sweet and rich, and there’s just the right amount of each, along with a decent hint of cheese,

I paired the BBQ Pulled Jackfruit Pizza (£3.50) with their Cauliflower Popcorn Bites (£3) for a quick and tasty after-work meal later in the week. These were relatively quick and very easy to ‘cook’ ie put in the oven, so were ideal for a night where I got home late from work (even if not the most nutritionally balanced – add a side salad if you must). The pizza was good quality, with the base crisp on the edges but soft and easy to eat. The smokey jackfruit and other well-seasoned veggie toppings were flavourful enough that you didn’t miss the cheese, and it wasn’t dry to eat at all thanks to the creamy ‘vegan house dressing’ on top. The cauliflower popcorn, sold as their vegan take of popcorn chicken, doesn’t quite do the same thing as the meat version in terms of texture, but regardless this was one of my favourite things I tried from the range. They were crisp on the outside with a nicely salted and flavoured batter.

The cauliflower in the middle is very soft and almost melting in the mouth. The sweet chilli sauce it comes with has a kick to it, and while still mild it’s definitely spicier than the usual Blue Dragon you’d grab off a supermarket shelf. Paired together they made a tasty and well-portioned meal for two.

Lastly, I tried out a selection of the ready-meals which are on offer in the range. First up was the chilli, which as very meaty, the mince was nicely cooked and retained its texture despite being a microwave meal. There was a hint of chilli so it wasn’t too spicy but the sauce was rich and thick. Spooning it out into a bowl, the portion size was perfect for me. My boyfriend suggested you wouldn’t be able to tell that this was vegan, and we both thought it was done very well for a ready meal, which can often be convenience over quality. 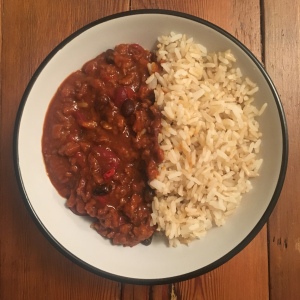 Next we tried the sweet potato katsu curry. Now actually I’d just assumed because of the packaging that this was a ready meal, but it’s not really. I was annoyed at myself for not looking more closely at the packaging as on inspection you have to heat the sweet potato ‘wedges’ in the oven for 15 minutes, separately from the rest of the dish which should be microwaved. It felt wasteful to have to heat the oven up for the sake of three small pieces of sweet potato, so I’d recommend doing any other baking/roasting/meal prep you have to do at the same time if you can to make things a bit more efficient. In addition, the wedges were drastically different in size and next time I would wait until they were all completely cooked through until microwaving the rest of the meal.

Sadly I just assumed the 15 minute cooking time would be accurate so I heated the rice and sauce up, only to realise the sweet potato was still raw and needed a good extra 10/15 minutes in the oven. We ended up finishing them off in the microwave too anyway so the rest of the meal didn’t go cold, which meant sadly the breadcrumbs went a bit soft so they didn’t have the crisp exterior that I’m sure they would’ve if we left them in the oven. Despite the cooking hurdles, the food itself was enjoyable. The curry sauce was mild and sweet, the white sticky rice was not too stodgy, and then you had the fresh crunch and some protein coming from edamame beans. In terms of the whole experience it wasn’t the best thing I tried, but the food was tasty.

Lastly, I tried the mushroom stroganoff, which is served with cauliflower rice, and at only 250 calories it is a great option for those trying to be healthier while also wanting something quick. This was the first time I’ve actually enjoyed eating cauliflower rice. It wasn’t soggy, it tasted fresh, and it was tossed with a tonne of garlic which I love. The stroganoff itself was so rich and creamy, with a powerful mushroom taste. The mushrooms weren’t slimy and had retained a ‘meaty’ texture. There were maybe two bits of spinach which seemed a bit pointless (though I’ve since seen people share photos of theirs on Facebook and they seemed to have a lot more!) but overall I thoroughly enjoyed this ready-meal and would definitely buy it for an evening when I didn’t have any time to cook.

You’ll notice that for the most part we didn’t have the healthiest of meals, and M&S is doing a great job at demolishing the stereotypical perception of vegan food (although if you’re looking for healthier options they seem to have plenty of those in the range too)! I got the chance to speak to some of their development chefs at the launch event of the range and for the most part they weren’t vegan themselves, but were dedicated to creating dishes which vegans and meat-eaters alike would enjoy and want to buy, which makes me feel very positive about where the food industry is heading. The only thing I feel this range is lacking is a dessert option, but here’s hoping M&S have some cards up their sleeves to reveal soon!

M&S provided me with these samples from their Plant Kitchen range for free, though all thoughts are my own honest opinions of the food.