I was lucky enough to be invited to the Veganuary launch party in partnership with Banana Tree, who were donating 25p from every vegan dish sold in January to the charity. Following the event, the restaurant launched their new vegan menu in London, and then rolled it out to the rest of their UK sites. Banana Tree kindly offered me a complimentary meal for two so I could check out some of the new dishes they had on offer since my last visit. 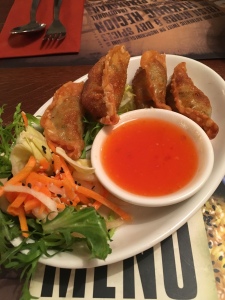 For starters we definitely had a deep fried theme going on. We ordered the Vegan Crispy Gyoza (please can someone actually tell me how to correctly pronounce this so I don’t feel embarrassed every time I order them!) which came with a sweet chilli dipping sauce. They looked a bit greasy but didn’t feel it when you actually ate them. The pastry was very crisp and there were some nice veggie flavours inside (I couldn’t distinguish what they actually were, mind you, though the menu says mushroom, carrot & spring onion). The sweet chilli was thinner than a shop bought sauce and had a real kick to it, we both enjoyed it as the accompaniment. Alongside the gyoza was a side salad, which after a mouthful I decided to leave as decoration. There was a reasonable amount of it but it looked a bit wilted and the dressing was very vinegary. Despite that though, this was an enjoyable start to the meal.

Slightly confusingly, it seemed that there were a handful of vegan items on the regular menu that weren’t on the vegan menu and vice versa (although it makes things a lot easier to have a vegan menu with all the suitable things pulled out so that is definitely a plus here)! The street style veggie karipap was one of such items, fried curry parcels that looked like mini Cornish pasties. They tasted kind of like samosas, with a reasonable amount of spice inside. Alongside was a peanut sauce, which was pretty tasty but a little thin, so it didn’t quite hold up to Pho’s peanut satay which is a favourite of ours.

Lastly on the starters we had to go for the spring rolls, as it’s our staple order usually anywhere we go. Wrapped in a lettuce leaf with herbs which gave them a real freshness, the rolls were crisp on the outside and with a crunch from the veggie filling. They were served with a spicy and slightly sweet Nuoc Cham dipping sauce which I really liked, which kept the whole thing light (despite being fried food) and zingy.

Onto the mains, and we ordered the vegan coconut kari, an extremely mild (ie no spice at all) coconut red curry. The lightly fried tofu did a great job at absorbing the flavours, and while the soy protein ‘vegan bites’ – new to the menu – didn’t absorb it as well, they are a great substitute for chicken in a curry. There was a generous amount of protein in this dish which was nice to see, compared to some places where you’ll only get three or four pieces of tofu. There was also aubergine in the curry which I’m a big fan of, cooked down until melt-in-the-mouth texture, but then you have plenty of crunchy bamboo shoots – which add a more savoury note against the sweetness of the creamy coconut sauce. I did the ‘vegan combo up’, so for £3.95 you can add rice, a house salad with crushed nuts, two sweetcorn cakes, and a sesame cracker. The salad wasn’t the best but considering you’d have to pay nearly as much just to order plain rice alongside your bowl of curry (it doesn’t come with rice as standard), I think the combo is worth doing. This aromatic spiced rice really brought some extra flavour to the dish when mixed in the curry sauce.

Jamie’s dish of choice was the Blackened Monk Noodles. He suggested they tasted along the lines of a chow mein, with a bit of a stickier sauce. I loved the couple of mouthfuls I tried and would definitely make this my meal of choice next time! Mixed in with the noodles were crunchy beansprouts, broccoli, carrots, baby corn, pepper & green beans. As well as this it’s served with the vegan bites which were a bit chewier and worked really well in this sauce. On the side comes a couple of the sweetcorn cakes which are crisp on the outside and doughy in the middle, super comforting. Jamie said this is the sort of dish that could easily convince a meat-eater they wouldn’t be missing out on anything by going vegan.

We also tried the Bun Bo Salad to get a feel for one of their lighter and presumably healthier options. It comes with one veggie spring roll and three of their vegan satay skewers. I love these and I’d recommend ordering a portion of them alone as a starter as they were definitely the best thing about this dish. They have a hint of aromatic spice and a meaty texture, though not quite in the same way as chicken. The rest of the dish though sadly didn’t really do it for me. Again I couldn’t help but find myself compare it to a similar dish at Pho which I loved, and this one missed the mark. It didn’t feel great value for money as the salad leaves reminded me very much of a bag of Florette off the shelf of a supermarket. The shredded cucumber and veggies were fresh but I found it all a bit too plain compared to the other flavour packed things we’d tried. The cold noodles were also a little rubbery for me. I did again enjoy the tasty Nuoc Cham sauce though, and with the whole bowl of it poured over the dish it did add a bit more flavour.

For pudding, they have a banana fritter served with sorbet. I’ve had similar things and it’s often way too sickly sweet and greasy for me, but I was pleasantly surprised by this. The banana was soft but not too mushy, and not as overly sweet as I’d expected either. Its topped with a squeeze of rich dark chocolate sauce, the slight bitterness offsetting the sweetness of everything else. I also really loved the mango sorbet served on the side. It was smooth and creamy, no ice crystals here, and sweet but refreshing alongside the deep fried part of the dish. Not a bad effort on the desserts here!

I haven’t mentioned the service and I’m not going to focus on that for this post, as I don’t think the service we received was representative of what you’d get as a customer visiting the restaurant. Overall we enjoyed the majority of the food we ate and it is pretty reasonable value – I’d happily come here again as a paying customer and have plenty of tasty options to choose from.

The meal was complimentary but this blog post is my honest opinion of the food at Banana Tree.