Having visited the Giggling Squid restaurant in Henley for their lunchtime ‘tapas’ and thoroughly enjoyed the experience, I was excited to hear the news that they were opening a new branch in Jericho, where Loch Fyne used to be. I had a taster of the Oxford restaurant at their launch party, but got the chance to have a proper explore of their vegetarian evening menu a couple of weeks later.

The vegan options are clearly labelled on the vegetarian menu, and happily, apart from a handful of dishes, the majority was SFV. The mains are essentially split into a large selection of curries and stir-fries, which took me a good while to decide between because of the subtle differences between them, but mainly because they all sounded delicious!

To start, we made the obligatory order of spring rolls. They were probably as well-presented as it’s possible for this dish to be. They were fresh and crunchy, with the shredded veg retaining some nice texture. The pastry was crisp and the sweet chilli dip had sufficient heat to it. All in all, they provided exactly what you want and expect from a spring roll. They were served on a bed of salad containing spiralised and julienned raw vegetables. It was slightly pickled, and Jamie actually ate some so it must’ve been pretty decent! Particularly compared to the usually decorative salads you often get served with spring rolls. 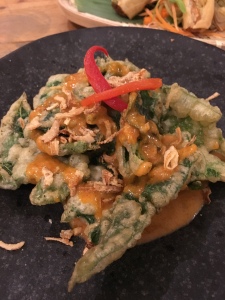 The other starter was the crispy pak maew, something that was completely new to both of us. I didn’t appreciate that the ‘crispy’ element meant that these would come battered, tempura style, so we’d definitely gone for the two least healthy starters! Still, I absolutely loved these. Though they were deep fried, they weren’t greasy, and that crispiness was very satisfying. They came with a creamy, sweet peanutty sauce which was delicious. They actually reminded me of a vegan version of a bowl of prawn crackers, in terms of the flavour and textures they conjured. Different from a starter I’ve had before, and would definitely order again. 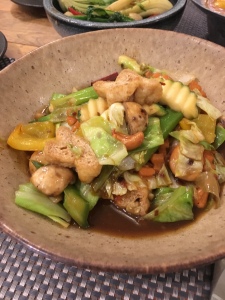 Our main courses all came out piping hot and beautifully presented, looking vibrant and colourful. Every plate had a little sticky note on the edge which read ‘vegan’ – it seemed a bit theatrical that two servers then spent a minute taking the labels off of all the various plates once they’d set them down, but I guess the point is that you can trust their practices in the kitchen. I’d ordered a cashew nut stir fry – a dish I often gravitate towards when I see it on the menu. The salty sauce was thick and rich, flavoured with soy and almost like a Thai-style gravy. The onion, peppers and mushrooms still had a pleasant crunch to them. There was the surprise addition of tofu cubes, which hadn’t been mentioned on the menu, which clearly hadn’t been cooking for long with the other ingredients as they were a bit bland and hadn’t absorbed much flavour, but I was glad to be getting a protein boost. The nutty toasted cashews were delicious and along with the slightly sweet, fluffy coconut rice, overall this was a really tasty and comforting dish.

Jamie had gone for a massaman curry, and I was also very happy to see they had a vegan version of this on the menu, as often it’s only suitable for vegetarians and it used to be one of my favourites. The creamy, coconutty sauce was gorgeously silky, with those signature aromatic spices of cinnamon and star anise coming through. The contents of the curry were broadly the same as the vegetables in the stir fry, apart from the addition of some potato, and again they were all nicely cooked. The broccoli in particular was delicious as it had soaked up all the flavour from the sauce, without going soggy. 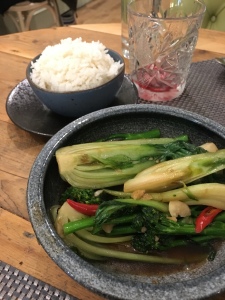 I also ordered a stir-fried bok choi side dish. It was exactly as I’d hoped, served with ample garlic (in some cases rather large chunks which you might prefer to leave in the bowl) and a delicious soy and sesame sauce. I love this vegetable and it made for a delicious addition to the rest of our meal.

The restaurant itself has a lovely atmosphere, and we couldn’t fault the service, making it feel like somewhere you could come for a slightly more special occasion (birthday/anniversary etc), and I think the prices are very reasonable for what you get. I’m particularly keen to go back for lunch where their tapas offers the opportunity to try more different bits and pieces for a pretty low set price.

Have you been to Giggling Squid yet? Let me know your favourite dishes in the comments!

This meal was complimentary; I’ve shared my honest opinion of the food and experience.