Last week, my team at work went to Will’s Deli for a colleague’s goodbye lunch. Will’s, on Woodstock Road in the city centre, is open for breakfast, lunch, and tea and cake. It offers a cosy, relaxed place to sit in, or the option to takeaway anything on their menu at a generous price.

We arrived very shortly after 12pm, and a good thing that we did, because the queue was growing much faster than the single person serving could handle. By the time we’d started eating, the queue was out the door of the deli, and remained so until we left. The previous time I’ve visited, and in fact whenever I’ve walked past Will’s at lunchtime, I’ve seen a similar thing occur, so take note if you want to visit on your lunch break, get here early! It certainly seems to demonstrate how good the food is as it’s so popular, but it’s also partly a reflection of the fact that they seem in desperate need of more staff. There were about five or so people in the queue in front of me and I didn’t have to wait an unreasonable amount of time, but I’d say if I’d have been at the back of that queue a bit later I might have thought twice and gone somewhere else. However, I would say that if you’ve got the time to spare, the food is worth the wait. 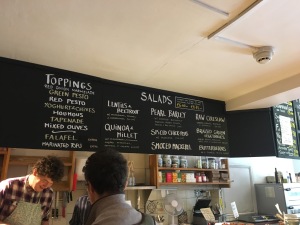 The menus change almost daily so I think I could quite easily become a regular here and it would take a long time for me to get bored of the food. Today’s hot veggie dish, also suitable for vegans, was a chickpea tagine which came served with rice or potatoes, and your choice of hot green veg or one selection from the salad bar. Only two of us are vegan but our table of food ended up being almost completely vegan apart from a sprinkling of cheese on one person’s dish, with three people opting for the tagine and two for the salad; a good reflection of how enticing the vegan food at Will’s is, I think.

I opted for the salad bar for a slightly cheaper, lighter option (had to make room for the cake)! Selecting three choices from the array of options available was almost too much for me but with the pressure of the building queue behind me I decided on a plate of beetroot and lentils, braised green vegetables, and spiced chickpeas, topped with houmous. My dish was super colourful, nutritious, and most importantly, full of flavour. The powerful harissa spice of the chickpeas was complemented by the cool creamy houmous. I’m one of the weird people who love greens and has been known to have a bowl of peas as an evening snack, so that part of the dish for me was great and the veg was cooked perfectly. My favourite thing on the plate though was definitely the beetroot lentils. It was sweet and somehow creamy, and the mushrooms added a nice extra texture to the dish. Everything was seasoned really nicely and the whole plate went down a treat on a mild summer’s day.

With a couple of vegan cakes on offer, I ordered the banana and chocolate cake to take with me back to the office to cure that mid-afternoon slump. It was pretty hectic in the restaurant and I think the waiter must’ve misheard me as I got given a slice of the chocolate orange instead, so it was lucky I checked inside my paper bag before I left the cafe. No harm done though, as my colleague had had her eye on that cake so she ordered the banana and we swapped later on. The chocolate cake looked really soft and had a decent amount of frosting on top – my colleague said it was delicious and that she’d love to find a similar recipe and replicate it. The banana cake had a thick layer of sticky apricot jam on top which I thoroughly enjoyed. It was very sweet and moist, a great afternoon pick-me-up. The only comment I had was that the four chocolate chips you can see in the picture were the only bits of chocolate in the cake, so I thought calling it a ‘banana and chocolate cake’ was a little misleading – I could’ve done with a few more dark chocolatey chunks!

We very rarely go out for a meal as a team and I think this was a great choice to spend a relaxed lunchtime. Overall, everyone enjoyed the food, the staff were super friendly, and to have the choice of more than one vegan cake is always a treat. Will be going back again soon.