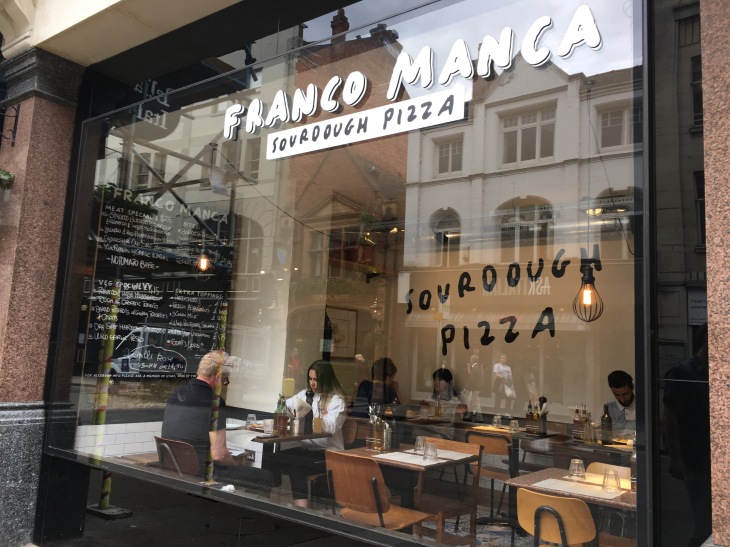 Sourdough pizza restaurant Franco Manca is the latest addition to the plethora of food options on George Street, and I was very happy to be invited to try out their vegan pizza the week after they opened on 14th August. Our reservation was for 5pm, so the place was fairly empty, and we were quickly seated by the front window, but by the time we left at 6.15 (still quite early really for dinner), the restaurant was full and buzzing with conversation – suggesting this pizza place is already proving a hit in Oxford so far.

Once seated, I was provided with an allergen menu for their standard pizzas on request, and the staff were also happy to advise which pizzas would be vegan-friendly from the specials menu. First though, they took our drinks orders, and there is no bog standard Diet Coke here – as the waitress sheepishly told me when I embarrassingly tried to order one after failing to look at the menu first, because they prefer to keep the ingredients on their menu natural, local, and organic wherever possible. Instead, I ordered their homemade lemonade, which was very sweet, and had a tasty twist with a hint of cloves.

We ordered the garlic bread as a starter (it’s worth mentioning to the server that you’re vegan just so they’re on the same page, though I don’t think they use dairy on their bases as standard anyway). The bread was huge and easily shared between two people, particularly considering you will be having lots more bread for your main course. It came with a little tomato sauce, olive oil, herbs, and lots and lots of minced garlic. It probably goes without saying, but if you’re on a first date and feeling a little self-conscious, maybe don’t go for this one. As it stands, me and Jamie are both massive fans of garlic and are way past caring about that, so we happily tucked in! You can really tell the difference with freshly made garlic bread, and it was delicious. This was our first experience of the Franco Manca sourdough base, and I think out of all the different types of pizza dough I’ve tried for this blog, this is my favourite. The base is puffed up and crispy round the edges but lovely and thin and soft in the middle, and with bread being something that I only treat myself to occasionally, I was in heaven. I often feel bloated and uncomfortable after going out for pizza, but that wasn’t the case this time, which I’ve discovered could be down to the type of low-gluten flour that they use. 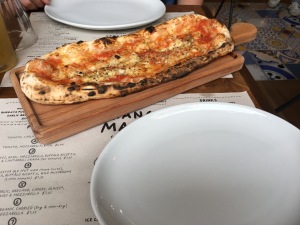 There is one vegan pizza on their menu as standard (the tomato, garlic, and oregano), and it’s outrageously cheap at £4.95. I fancied something a bit more substantial though, and was told that most of the vegetarian options can be made vegan on request (i.e. without the cheese), so opted for an interesting sounding pizza from the specials board, topped with baked potatoes, cherry tomatoes, and onion. I love the fact that the menu, including optional additional toppings, changes regularly depending on what’s in season, meaning more options for vegans than many places offer, so you can potentially try something different every time you come. We didn’t have to wait long after the empty plates from our starters were taken away for our pizzas to arrive, and they looked and smelled beautiful. They were also larger than I was expecting for the price, which was a bonus. As you can see from the photo, Franco Manca don’t serve vegan cheese, but to be honest I didn’t miss it at all as the pizza was delicious without. I can say pretty confidently that I’ve never had potato on a pizza before (a carb-lover’s heaven?) and it might seem like a bit of a weird combination but it actually worked really well, as the potatoes still had a bit of bite to them and added a welcome extra texture to the plate. The cherry tomatoes gave a burst of sweetness to each mouthful, along with the slivers of sundried tomato, which were an unexpected and delicious addition. We were offered the chilli dip to try, which is suitable for vegans, and it had a really nice smokey flavour, but unfortunately my tongue couldn’t quite cope with the heat. Jamie finished off the pot though. 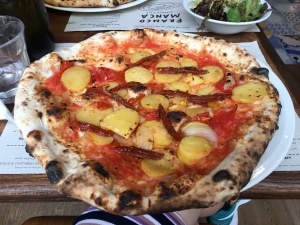 In a futile attempt to make my meal slightly more nutritious, I’d ordered a mixed leaf salad on the side, which came with alfalfa sprouts, a couple of cherry tomatoes, and a tangy dressing. At £2.45 you’re not really breaking the bank with this, but at the same time it was a small bowl and I could probably take it or leave it – or in fact, you could spend those couple of pounds on even more veggie toppings for the pizza, if you were so inclined.

I was disappointed to find that there is no vegan dessert option at Franco Manca. Our waitress kindly spent a while sifting through the allergen menu for us to learn that even the raspberry and lemon sorbets are made using egg and milk, so you’ll have to head to Tesco and pick up a tub of Alpro ice cream afterwards if you want something to satisfy your sweet tooth. As many other restaurants are realising, it’s not particularly difficult to add a tasty vegan dessert option to the menu which proves popular among vegans and non-vegans alike, so fingers crossed Franco Manca will consider adding something to their menu in the near future.

Aside from the lack of dessert options, we had a really lovely meal. The staff are still learning as the restaurant is so new, but you couldn’t really tell because the service was as good as you’d expect anywhere. It was definitely quick enough that I’d feel confident I could grab a pizza in my lunch hour if I worked nearby, though they also do takeaway if you’re even shorter on time or wanted to pick something up on the way home. The pizzas are fantastic value too, probably around half of the price you can expect to pay at other chain restaurants on George Street, and at the same time I felt they were made to a higher standard. Because of the low price, and the atmosphere of the restaurant, I think this is a great place for the whole family to enjoy a meal out, or for those of us on a budget. I’ll be keeping my eye on the specials board (visible from the street if you aren’t ashamed to stare through the window) and hopefully heading back soon.

Disclaimer: I received a complimentary meal in exchange for a review, but I’ve shared with you my honest thoughts on the food and experience we had on our visit. 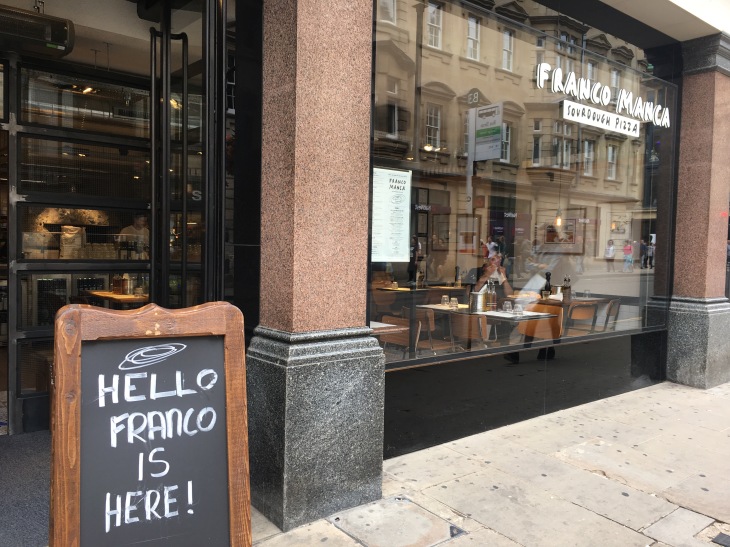