This post is actually an amalgamation of two visits to Wagamama within the space of two weeks. I suppose that should be an indication that the Japanese-style restaurant has plenty of options for vegans, is relatively budget-friendly, and the food is up to scratch. I was happy to see that things have changed a little since I last visited. You don’t need to ask for their new vegetarian and vegan menu, it is given to every diner as they sit down. Having looked briefly beforehand online, I did come to the conclusion that this menu is more of a clever re-brand from the chain restaurant than delivering much in the way of new food to try. However, it does make things easier for us not having to flip through the extensive allergen menu, and probably easier for the staff too no longer having to note down any adaptations to dishes on the regular menu.

On the first visit earlier this month with a friend, I ordered the yasai samla curry, which I’d never tried before at Wagamama (my dish of choice usually being a veganised Donburi). It was described as a lemongrass and coconut curry, and is exactly what it said on the tin – it had the overwhelming flavour of lemongrass and not a lot else really. Along with the sticky white rice, the creamy curry made for a warming, filling meal, but overall I wasn’t that overwhelmed by it. This style of curry can be found at almost every chain restaurant now I feel, with little to distinguish one from another. Katie had ordered the new tofu dish which looked great and I did find myself with a little food envy.

The second time, I went with Jamie, and we were feeling pretty hungry so ordered some Yasai steamed gyoza to start. The vegetable filling wasn’t bursting with flavour on its own, but combined with the sweet, vinegary dipping sauce, they were very tasty. Five were enough for us to share between us to keep us going until our mains. This time I didn’t make the same mistake twice so tried the only new main course on the vegan menu, the kare borosu. The broth had a strong mushroom flavour, and was pretty spicy from the amount of chilli. There weren’t that many of the shichimi-coated silken tofu pieces, but the generous amount of mushrooms made up for that, and I actually preferred the meaty taste and texture of those anyway. The handful of coriander and other veggies on top tasted great mixed in with the broth. This was also my first time eating udon noodles and I did enjoy them, though made a bit of a mess attempting to eat it all. I thought the size of the bowl was pretty generous and I had to take some of it home in a takeaway pot for later as I couldn’t finish it all. The meal was very salty, making me thirsty for the rest of the evening. 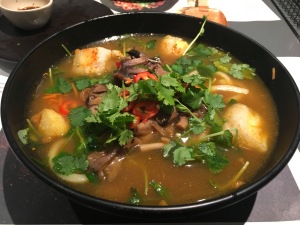 Wagamama used to be one of my go-to places and depending on who I was going out for dinner with I’d still be happy to go there, but having explored so many other vegan options in Oxford I would say it’s moving further down the list of restaurants I like to eat at. The food is perfectly fine, but still chain restaurant quality, and it is a little pricier for that kind of food than a lot of the other available options, without a student discount or any money-off vouchers ever available to download. Having very recently tried Pho, the chain offering Vietnamese style noodle bowls and currys, I’d probably opt to head to the Westgate restaurant instead. All that being said, the next time I’m in London I’ll be making a beeline to the Wagamama Noodle Lab, because their trial seitan katsu curry isn’t something I want to miss out on if I can help it!

Wow it’s suddenly been a while, hi everyone 👋🏼 There’s been so much going on recently insta has definitely taken a back seat.
Photo dump from my long weekend away with family 🏖 swipe for puppy cuddles! 🐶
Dreaming of @doughnuttime_uk 💭
*Finally* got myself the @wasabi_uk zalmon sushi set [a d\p r ] 🍣 SWIPE for a closer look 🥢
Spicy fajita mix with tofu and homemade wedges 🌶 such a quick meal to make on a weeknight, definitely recommend! 😋
The classic overnight oats 🥣 made with @thecollectiveuk fudge Greek-style yoghurt (ad-pr sample) Genuinely don’t think I’ll need to buy any other dairy-free yoghurt again because theirs is so so good 😋