On one of those unexpectedly beautiful hot days in late April, Jamie and I decided on a spur of the moment to go out for a pub dinner, and by fortunate coincidence The King’s Arms in Sandford had launched their new menu featuring a number of vegan options literally two days before. It’s a Chef and Brewer, so I had my doubts, but the thought of a nice long walk in the sun and eating dinner looking out over Sandford lock was too tempting, plus the menu options actually sounded quite decent.

We managed to get a seat in the outdoor area of the restaurant, though it was very busy. Because it was a sunny Friday evening and this pub is in a pretty prime location for making the most of that, the queue at the bar went along the full length of the room and almost out of the front door. There were definitely not enough staff in, though I can’t blame them for not anticipating the weather considering it had been snow a matter of days earlier. Having waited probably 15-20 minutes, I was told when I got to the bar that there was an hour wait on food. I’d committed by this point though, and we weren’t in a hurry, so that was fine.

The pub offers a set menu on weekday evenings, so our seemingly best value option was two courses for £13.49. However, despite the vegan main courses being included, there was neither a vegan starter or pudding, which made this offer redundant to me. The kind person taking my order worked some magic and managed to get me a vegan pudding as part of the deal (as I’m one of those annoying people, and pointed out that it was cheaper than some of the other options in the set menu anyway).

For my main course I really deliberated between the vegan cheese burger which sounded amazing, and the Asian noodle salad which also sounded good but more importantly for me at that point sounded like it was about a quarter of the calories, and I was already leading a very unhealthy existence that week. In the end my conscience won and I went for the noodle salad, described as ‘carrot and cucumber ribbons, pak choi, coriander, sliced red chilli, Asian slaw, grapefruit and Thai dressing’. I opted to top it with the ‘courgette & harissa flavoured rice skewers’. Sounds like a pretty decent meal, right? Obviously, I should’ve known better than to order a salad at a chain restaurant. Having been warned about the long wait for the food, we were pleasantly surprised that our food came out in little over half an hour. I waited until the waiter had left to laugh out loud at what I’d been presented with though.

The carrot ribbons were barely the equivalent of half a carrot, and were visibly dry and old. The cucumber ribbons were similarly quite dry and to Jamie and my amusement the cucumber in his salad was obviously just the middle bit left over after the peelings they’d taken off for my meal. I’m all for reducing food waste so I guess I shouldn’t complain, but they were clearly taking maximum cost-cutting measures here. Having worked at a supermarket, I instantly recognised the small handful of salad in the bowl as coming from a budget bag of ‘sweet and crispy’. Likewise, the little pile of noodles looked identical to the ones Tesco sells in a pot, though it absolutely better not have been that because they contain egg. The grapefruit was literally two segments of the bitter stuff from a tin. In fact, reaching the end of this paragraph I’m starting to wish I had affiliate links with Tesco for all these products! #NotSponsored. 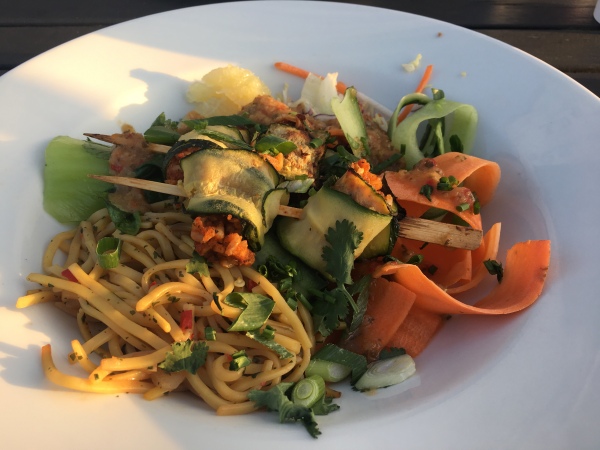 I think the most offensive thing was the rice skewers. Although it didn’t say anything about this on the fixed price menu, I noticed on my bill that I was charged £3 extra for them. This brought the cost of my food alone up to nearly £17 which I frankly would avoid at a much nicer establishment than this. With the queue being so long I didn’t really have a choice but to accept it, and hope before my food arrived that the skewers would be worth it. I think it’s safe to say, they weren’t. Can you even see them in the photo? The four wafer thin slivers of courgette were surrounding a few of grains of bland rice which had clearly been cooked some time ago and had now formed a solid, crunchy block. I’m actually reliving my anger while writing this haha, it was just so bad! The whole bowl of food I could have put together at home with fresher, tastier ingredients, for pennies. The thai sauce was edible (I wouldn’t call it a dressing, more a jelly) and while nothing tasted super awful apart from the grapefruit, the textures were way off and it was not remotely enjoyable.

We waited longer than it had taken for our mains to arrive, and we started to wonder whether the person who had cleared our plates would have actually told the kitchen, and how they would know that we were ready for our puddings. After about forty minutes I grabbed the attention of someone and they went inside to check. They were very apologetic when they arrived with our dessert some time later, so we could have been waiting there a while if we hadn’t asked about it. The dessert was by far the best part of the meal. It was a chocolate torte, so not particularly original and probably the same make as the many others that are available at chain restaurants these days, but it was much better quality than the rest of the food (I suppose it requires less skill to take something out of a fridge/freezer and shove a scoop of ice cream next to it). It had a sticky base made out of dates and nuts, and a rich chocolate and coconut milk filling. It was a decent sized slice and incredibly rich. I was also impressed they had vegan ice cream, which was definitely needed to help the torte go down. After eating the whole thing, I did leave the pub feeling very full, so at least it wasn’t a totally wasted meal.

I’d so regretted not choosing the vegan burger for my main course and thought perhaps I’d have had a completely different experience if I did, until one of my Instagram followers messaged me to say she’d visited and tried the burger and it was vile. We exchanged horror stories and agreed we’d never go back there for food. It’s a lovely place to stop for a drink and I’d happily go back for that, but take this as a word of warning!