Tucked away down King Edward Street is this cute Scandinavian Café, Skogen Kitchen, and they are nailing the hygge vibes. Having spied that they sell vegan cinnamon buns to order on their website, I was sure they would be a vegan-friendly spot to meet a friend for a light lunch and long catch-up. 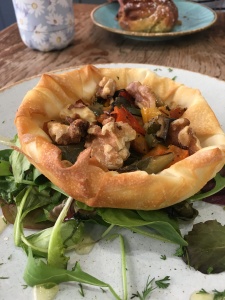 On a cold wintery day the cafe was looking extra cosy, and considering that it’s slightly away from the bustle of the city centre, it remained busy for the duration of our 2 hour visit. The menu itself isn’t huge but there was a clearly labelled vegan filo tart in the fridge, a couple of salads, and a soup on offer. I went for the tart, which looked pretty much identical to the vegetarian tart minus the cheese. The salad beneath was a little lack-lustre but with plenty of dill the flavour was good. The filo pastry was mostly crisp, though a little on the chewy side with some bites where there were more layers. The nicely roasted veggies made sure it wasn’t too dry, and walnuts on top gave the dish a bit of substance as it was lacking the cheese. 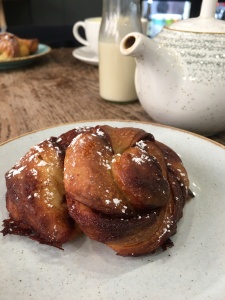 After polishing off the tart, I tucked into my cinnamon bun, which was a little chewy at the edges, soft, perfectly sweet and delicately spiced with cinnamon. One of these with a pot of tea and plant-based milk (50p extra, even for soya, which I thought was a bit steep!) is perfect fika material. I’d skipped breakfast so between the two items I felt comfortably full, but for a stop for elevenses or a mid-afternoon snack this would do on its own. I grabbed a couple in a paper bag to take home as gifts, which my boyfriend and sister much appreciated!

Even with Oxford prices, it’s not the cheapest cafe in town, with the small tart priced at around £7.50. The soup was cheaper though and probably more filling, so it really depends what you fancy! Me and Daisy spent a good couple of hours in the cafe chatting and there was such a nice atmosphere that I thought it was definitely worth it. Thoroughly recommend checking this place out for a catch-up with a friend, or an afternoon of studying with a sweet treat to keep you going.