I was excited to hear about the new Oxfam Superstore opening in the Cowley Business Park, and even more excited when I learned that they have a cafe which served vegan options. Only a twenty-minute walk from my house and pretty much next door to my gym, it’s nice to have somewhere nearby to grab lunch without going into Cowley Centre.

We arrived around 1pm, by which time the vegan apricot filled croissants had long since sold out (good excuse to go again soon). It’s a small cafe, but the chilled cabinet had a good selection of vegan sandwiches available, and there was hot food on offer too. Both Jamie and I ordered a Moroccan filo parcel which was filled with chickpeas, veggies and a mild sauce, as well as chunks of melty vegan cheese. It wasn’t packed with flavour – we decided this was food designed mostly for older British people who don’t tend to have the most adventurous palettes – but it was definitely tasty nonetheless. It was served with a reasonable amount of salad on the side, which consisted mainly of rocket and lots of raw red onion. Jamie isn’t a fan of either so he was out of luck! But I liked it and the flavours went well with the pie. 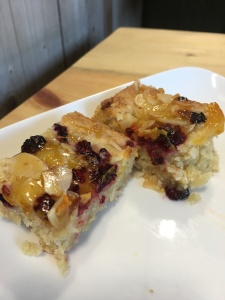 I can’t turn down a vegan sweet treat when it’s on offer, so I got us a raspberry and almond cake slice to share. It was super sweet and quite dense in texture, I assumed they used a lot of ground almonds instead of flour as it was also gluten-free. The raspberries added a slight sharpness in comparison, then it was topped with a sticky jam. Overall a very enjoyable piece of cake, and although it was quite small it was very filling.

We also grabbed a bag of lentil crisps between us, and one hot drink, and our bill came to around £25, which I have to admit I was a little surprised at as I expected this kind of place to be a bit better value. Still, it’s great to know your money is going to a good cause, and everything that we ate was reasonably tasty. We spent the next hour or so pottering around the superstore, perusing through the books and DVDs, and as a relaxed afternoon out it was really very enjoyable! The cafe is very laid-back and I can imagine everyone from young families to elderly couples would feel welcome here. We noticed they had plug sockets in the seating area if you fancied bringing your laptop and doing a spot of work too. Can’t complain at all about having a place like this to visit nearby, I’ll be taking another trip on a Saturday sometime soon!