A recent trip to Amsterdam had me overwhelmed with just how many vegan restaurants there are, and how easy it is to find plant-based options at other places too! I spent three excellent days of eating, consuming some culture along the way, with my friend Becky, and here are some of the highlights. 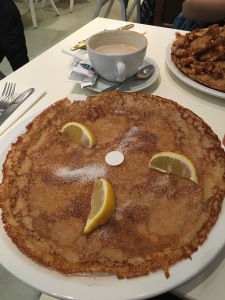 We timed our visit well, as we had a 15-minute wait for the next table but shortly after we arrived hordes more visitors came to try and get a seat but were turned away (though we later discovered this is a chain and you can find a fair few branches around the city) – it’s always a sign that the food is decent when the queue is out the door! They advertised a separate vegan menu but to be honest when it was handed to me the options were fairly limited. I went for the classic lemon and sugar, which was huge, filling and tasty. Probably not one for vegans to go out of their way to go to, but a pretty decent option if your party has a variety of dietary requirements and you all want to enjoy pancakes – they have gluten-free available too. 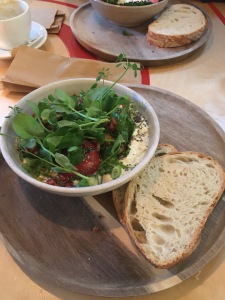 Another spot where we timed it perfectly, the queue about twenty minutes after we’d sat down was possibly the longest queue I’ve ever seen at a restaurant! This place is huge too, spanning three floors, with a really relaxed and comfy atmosphere. There were a couple of pretty interesting sounding vegan options, with super clear labelling throughout the menu. I went with the ‘All-Day Vegan’ which I really thought was going to be like a vegan version of a traditional English breakfast, but it was so far from that! It came as a bowl of soupy coconut-poached silken tofu (I don’t know how to make that sound nice but it was actually really tasty, kind of like a loosely cooked scrambled egg in texture) filled with tomatoes, potato, pomegranate seeds and topped with salad. On the side were a couple of pieces of sourdough to dunk in the comforting bowl. I don’t think I’ve eaten anything like it before, and I was happy to have tried it! Definitely a great way to get lots of protein in before a day of sight-seeing.

Another chain throughout the Netherlands, it was a nice place to stop on our last day where we felt we’d had a number of fairly indulgent meals in a row and were getting down to our last euros. They have lots of vegan topping combinations for their bagels, or porridge with plant-based milk is an option. I went for a breakfast tea with oat milk, and banana and maple syrup on multi-seed bread, for a quick, cheap and cheerful start to the day.

This cute little plant-based store and deli is the perfect spot for a healthier lunch. They had a variety of salads and pastry options to grab and go or eat in their cosy seating area. You could also buy vegan snacks and staple foods to take home, though I recognised a lot of the brands and couldn’t believe how expensive they were here compared to if you buy them in the UK! Becky ordered a root vegetable and dill salad which looked so wholesome and tasty, and I was naughty and opted for a ‘cheese’ filled pastry. I grabbed a cinnamon bun to go because I just can’t resist them. I expect the menu options change very regularly but you’ll definitely find something good to eat here.

We were both a bit sceptical about whether this gimmick would be any good, but I was pleasantly surprised that they really delivered on the quality and presentation of the food!

Avocado gets a bad rep and it’s not particularly sustainable so I very rarely eat it, but this was a lovely treat. There was so much on the menu I would’ve liked to try but as I was in a savoury mood I went for the avo garden, which looks gorgeous on the plate and was really satisfying, and some delicious crispy sweet potato fries served with a vegan truffle mayo. If only we had time to go back again and try more…

When I asked for recommendations about where to go in Amsterdam, this came up again and again. It seems like one of the most famous restaurants among the global vegan community! There are a couple of branches in Amsterdam and the one we went to was super busy even though it was around 3pm, but they managed to seat us at the bar. Having eaten so much food over the weekend it had got to the point where I wasn’t even that hungry but I knew I had to try one of their famous burgers. I went for the ‘Daddy Mc Chik’n’ and it did not disappoint. This was actually probably the best vegan burger I’ve eaten in my life. The mock chicken burger was stacked with salad, melty cheese and fake bacon and it was junk food heaven on Earth. Becky got the Kapsalon – schwarma fries topped again with cheese and allll the jalapenos. It was pretty tasty, and very spicy! We wanted to try the traditional bitterballs, and sadly was less of a fan of these, though having never tried them before as a non-vegan I have no idea how they compare. 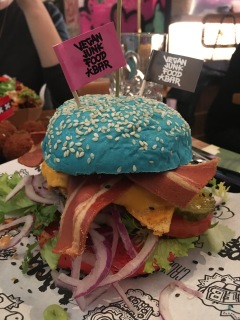 What to do when we first arrive in Amsterdam, but get pancakes? By the time we’d checked into our hotel we were super hungry and luckily Mr Stacks was a short walk away. I could’ve ordered most things on the menu, everything sounded delicious, and as we saw other diners’ orders starting to arrive, the portion sizes look perfect for our grumbling stomachs. I went for the vegan tacos, which were stuffed full with mock beef mince, lettuce, cheese and sour cream. On the side was a super punchy tomato and red onion salsa. I loved everything about this! Becky ordered the vegan burger. Yes, this was literally a mock beef cheeseburger with two thick American style pancakes as the bun. It was served with chunky sweet potato wedges. I tried a mouthful and it was delicious. Proper filling and indulgent comfort food. Not necessarily the traditional pancakes you might expect but I thoroughly recommend putting this stop on your list if you’re visiting. 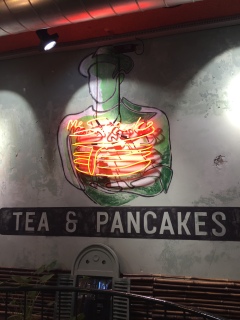 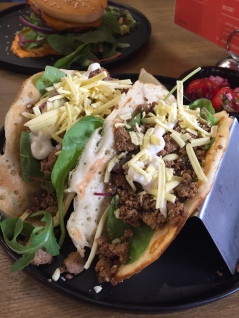 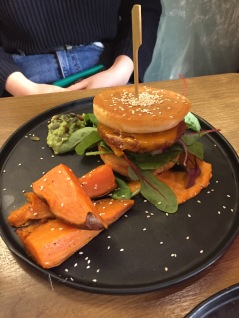 We tried unsuccessfully on our first night to eat there, as we didn’t have a booking and there were no tables free, so we made sure to call up and make one for the following night. The atmosphere was pretty romantic with very low lighting and quiet conversation as they haven’t packed out the restaurant with endless tables, by any stretch. I ordered the mushroom and lentil pate style dish for starters. I didn’t even like pate before going vegan but this was delicious. Thick chunks of bread to smother it thickly over made for a great start to the meal. My main was a barbacoa bowl, a Mexican style dish with pulled jackfruit, corn, avocado, beans, tortilla chips. Although I was sorely tempted by the cheese platter for dessert, my bank balance was feeling a bit bruised, so I opted for the apple crumble cake and whipped cream for half the price. It was a bit of a disappointing end to the meal in comparison to the rest of my food as it was a little dry and lacked any apple flavour, with cinnamon being the main thing that came through. On the other hand, Becky’s pavlova with peaches and raspberry looked wonderful and I was having major dessert envy! I think I just ordered badly, you could definitely have a great dessert here. 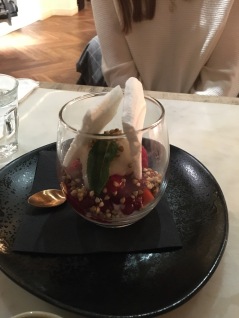 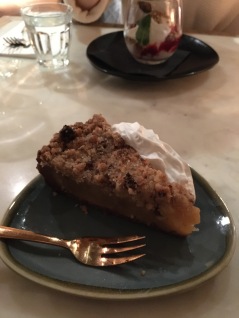 Having been turned away from Meatless District, luckily there was another little vegan restaurant literally just down the road. Despite it being half the size, they had a good few cosy tables left at the back. Their concept was ‘vegan soul food’ which hailed from various parts of the globe. Becky went for the Roti Masala, a veggie curry served with roti, and I got the ‘Fried ‘n Trippy’, fried rice with a grilled mushroom and plantain. Both dishes definitely delivered on the comfort and flavour, and it was a nice warming end to a day of walking around outside in the cold! 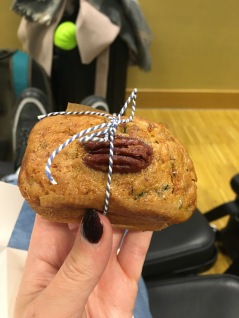 We had a pit stop here before heading back to collect our bags and go to the airport. The cakes are expensive, even for Amsterdam, but they’re made with real care with high quality ingredients. There were plenty of vegan options, with other dietary requirements catered for and really clear labelling. The staff were super friendly and this cafe is a recommended cosy spot to get a warm drink and sweet treat.

There were so many more places I would’ve loved to check out, if only we had more time (or mainly, more space in our tummies). I’m sure it won’t be long before I’m back in Amsterdam again, and I definitely recommend it for a foodie trip away. Yum!