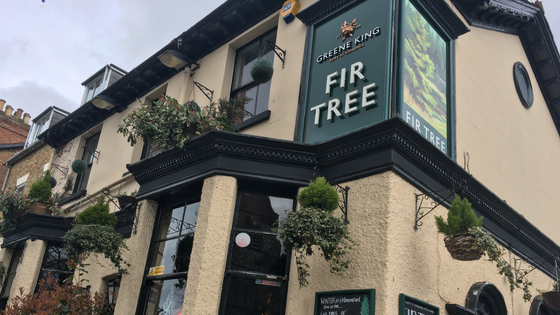 When I saw a page shared on a vegan Facebook group about a new Sunday lunch menu at the Fir Tree on Iffley Road, I was more than a bit excited – quickly sharing the link with my only vegan friend in Oxford, we arranged to eat there on the weekend. Feast Without The Beast only launched last weekend so there isn’t much online to tell you what you can expect from the food yet, but the menu looked promising, and this is the only place in Oxford with a fully vegan offering, so it was definitely high on my list of places to check out.

When I arrived, I felt a bit awkward about having called in advance to book a table because we were literally the only ones there. That can be a bit off-putting, but I’m sure it’s just because this is a brand new concept and not many people have heard about it yet – so vegan friends of Oxford, please head to the Fir Tree sometime soon and show them that the market is here! 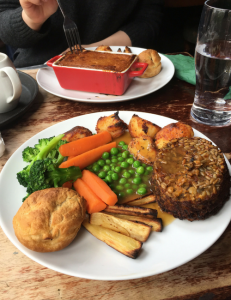 You can really tell that a lot of thought and care has gone into putting together this menu, I could have easily ordered any of the dishes. The chef brought the food out to our table himself and seemed really keen that we enjoy our meal. Valentina ordered the moussaka, so I decided to go for the nut roast in the interest of testing out different things. This was, shock, the first nut roast I’ve ever eaten, so I don’t really have anything to compare it to, but I was happy that it wasn’t too dry thanks to the butternut squash, and its sweetness combined with the mixed nuts and seeds was really delicious. I might be more inclined to order a nut roast at other places now! The roast potatoes were perfectly crispy (why can’t I get mine to go like that..), and there was a decent variety of vegetables and trimmings along with it, including the thick gravy pulling everything together. I tried a bite of Valentina’s moussaka, which she said it reminded her of home, and that really summed up how I felt about my meal too, in the best way, because I think that’s exactly what you want from a Sunday dinner. 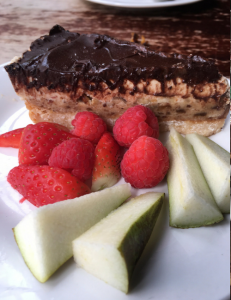 Although we were both feeling pretty full from our mains, we couldn’t say no to the opportunity to try a coveted vegan dessert that wasn’t a sorbet. Valentina had been dreaming about that tiramisu since I sent her the menu, and I’m never one to turn down a pudding, so I decided to order the snix, a millionaire’s shortbread style cake, which was served with fruit salad. It was sweet, coco-nutty, and very rich (literally dread to think how many calories I consumed over these two courses with all of those nuts), it felt like such an indulgent treat. Valentina said the tiramisu was deliciously creamy and although it wasn’t really like a traditional tiramisu, it was very tasty just the same.

Valentina mentioned that as she got to the pub a little early she thought she’d grab a coffee, but when she tried to order at the bar, they didn’t have any soy milk or even really seem to know what it was, which seemed a bit strange when they were serving an all-vegan menu. The yorkshire pudding also was a bit hard on top, but actually this was the first vegan one I’ve had cooked for me and it was still a pretty decent attempt (and far superior to anything I’ve come up with at home). So aside from these tiny things, it was a really lovely meal, and I only hope that more people go and show their support for the new menu.

If you’re a student missing mum’s roast dinner, or the thought of slaving away in the kitchen for two hours on a Sunday afternoon isn’t really your thing, I’d definitely recommend the Feast Without The Beast for a comforting and filling home-cooked meal. I’m sure I could bring my non-vegan boyfriend here and he’d love it too, and it’s the sort of place I might take my family if they were in Oxford for a visit. If you want to show sceptics that being vegan doesn’t just mean eating salad, this is the place to come. 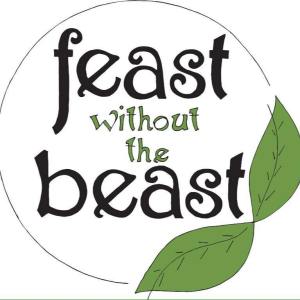