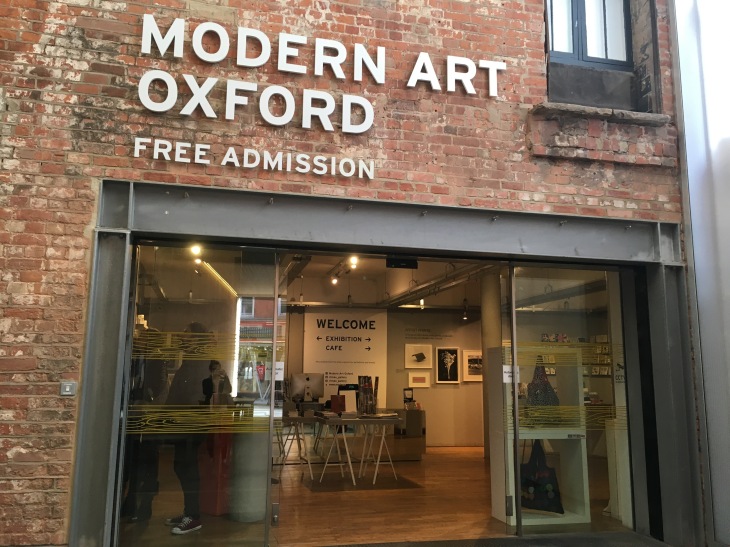 A couple of weeks back, I was very happy to hear from the lovely Simone at Prana Yoga, letting me know about the event she was organising and inviting me along. The programme consisted of a full timetable of yoga classes, lunchtime foodie fairs, massage, and mindfulness, all hosted by Prana in partnership with The HandleBar Café and Modern Art Oxford. From Hatha classes, to dynamic Vinyasa, to energetic Acro yoga, there was something for those already practising regularly, and new yogis alike. I was excited to try a couple of different classes on the Saturday, speak to some local groups and businesses who were there at lunchtime, and join fellow lovers of good food for a vegan dinner party in the evening. 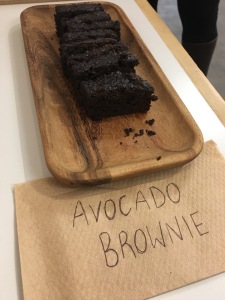 Allowing myself a lie-in sadly meant missing the morning Rise and Flow class led by Grace, but I arrived at the event for 12pm to meet Simone in person, and to say hello to some of the other foodies who were taking part. It was good to see VeloVedic again, meet Jamie from Vegemental, sample some of The Natural Buzz‘ famous avocado brownie, and connect with Oxford University Vegan Society, who I hope to see again sometime soon at one of their events. I picked up their termcard and it looks like they have some great things planned for their members in the upcoming academic year.

After popping out to meet a friend for lunch, I returned to MOMA for an afternoon Acro Yoga session. I’ll admit I didn’t do much research before the class so I had no idea what to expect other than what I could infer from the name. Anita explained at the start of the class that acro was about being more comfortable in our own bodies, and with human contact, which apparently we are not very good at in Britain! After an energising warm up, we were encouraged to get into pairs and threes with people we hadn’t met and have a go taking it in turns at ‘flying’ (essentially holding various body-weight balances, handstands etc using a partner for support), ‘basing’ (the person on the ground bearing some of the flyer’s weight) and being a spotter (making sure the flyer doesn’t fall and smash their face). I can imagine you would grow in confidence quite quickly if you took this class regularly, as you really do have to rely on trusting yourself and your partner to be able to get in and out of the postures. I’ll be honest, it wasn’t really my type of thing at all, it was very different to the traditional yoga I’ve done before, and being surrounded by a group of people who had clearly almost all tried it at least once didn’t help with my insecurity. Despite finding having to get up close and personal with complete strangers pretty uncomfortable myself, I did feel that the instructor was really engaging, knowledgeable, and everyone was very encouraging – so if you’re a bit more confident and think it might be up your street, I’d definitely say give it a go and see what it’s like. Anita is leading Oxford’s first regular Acro Yoga class from November. Perhaps I’ll try again when I’ve built up my core strength a bit more!

After popping out for a coffee, I returned to MOMA to finish off the day with a yoga dinner, an event Prana hold every so often, but this weekend was the first time it was hosted at the museum. The three-course dinner was provided by The Handlebar Cafe and Kitchen, one of my favourite vegan-friendly spots in Oxford (their coconut pancakes are a must-try for brunch). The evening began with an energising yoga class, where I was much more in my comfort zone than during the Acro, and found it super enjoyable. I worked up a sweat but felt very calm as we finished the class. 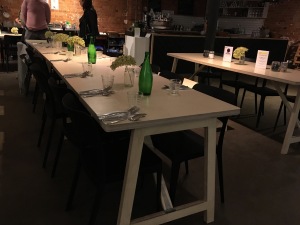 Having earned quite an appetite by this point, the group headed up to the museum’s cafe to take our seats at the prettily laid out table. Happily we didn’t have to wait long for the food to arrive. To start, we had half an avocado resting on a bed of a smokey dressed pearl barley and kale salad. The creamy avocado was perfect with the bite from the grains, with the mixed tomato salad citrus-y and fresh. I can’t help but wonder how many avocados they had to buy to make sure there were enough at the perfect ripeness to feed the whole table of diners!

Our main course was a fruity quinoa salad, deliciously seasoned with spices such as cumin and bursting with flavour from the cranberries. The quinoa was lovely and fluffy. A handful of peppery rocket and a sprinkling of salt cut through the sweetness from the fruit and veggies, which included carrot and peppers too.

Last but not least, for dessert was a decadent slice of chocolate tart, with a chewy, nutty base, topped with a sprinkling of coconut. It felt like a thoroughly indulgent way to round off a healthy meal, but actually with its all-natural ingredients I didn’t feel even a little bit guilty!

Although the food was delicious, possibly my favourite thing about the event was getting to meet and speak to some like-minded people (as the vegans I know in real life are few and far between). By pure chance I sat down next to Karina, and quickly discovered with my fellow Oxford vegan blogger that we had a huge amount in common, and in general I felt the whole weekend was a perfect way to bring people from the community with similar interests together. Prana are planning on holding more of these vegan yoga dinners and I hope they’ll be a regular fixture in my calendar from now on.

Good morning ☀️ you neeed to try this yoghurt 😋
Dreaming of this 💭 it feels like foreverr since we had a takeaway but probs is only 2 weeks max 😆
Simple but super yum breakfast 😋 as you can probably tell, most of my meals are anything but fancy. Being vegan doesn’t have to be complicated!
Ad-PR sample
Not a particularly weather appropriate meal but when is a roast not a good idea? 😋
🍔 Should I update my Brewdog review? 😻