If it weren’t for the magic of social media, I might well still not know this place existed. A couple of weeks ago, this unassuming little cafe opened on Saint Clements to no fanfare, and it was by pure chance that a colleague’s friend had stumbled across it during its opening week and it got shared with me. Rick’s Vegetarian didn’t have a website, but they did have a couple of reviews on Google, and after a bit of searching I found them on Facebook. The photo shared with me allowed me a glimpse of the menu which was definitely enough to convince me this was a great addition to the East Oxford cafe scene.

I’ve now visited Rick’s Vegetarian twice, for lunch and breakfast, and it makes me so happy that there are now two vegan kitchens in Oxford, appearing within the space of a handful of months (the other being Happy Friday Kitchen). Not to be confused with Rick’s Cafe on Cowley Road, though owned by the same people, this is a brand new plant-based venture. There is only space for about 15 or so people to sit in, and it’s particularly busy at peak times, but even if it’s to takeaway, I really recommend trying the food.

The first time I visited during the week with my boyfriend, I ordered the lunch bowl, at £4.99, which features your choice of grain, pulse, and stew, and is served with roasted vegetables and salad. There was a larger portion size available for £7.99 but I was advised that I might struggle. Despite questioning their assumption – I have a pretty impressive appetite – I decided to save myself a few pennies and for once not be greedy. I didn’t need to worry. When my plate was presented to me I was surprised that they were serving this amount of food at lunch for a fiver. I’d chosen the aubergine stew, which was rich, smokey and delicious. I wish I had the patience to cook aubergine with love like this because it is just so much better when done properly. My stew was served with bulgar and chickpeas, both of which were deliciously seasoned, and well cooked vegetables. Even the salad, which I’m often not much of a fan of, was great – though word of warning there was a lot of raw onion!

Jamie ordered the soup, making me feel particularly greedy from the size of my plate, but in fact when it came it was a really decent size and a great option for those on a budget at less than £4. The homemade vegetable soup was packed with natural, nutritious, flavourful ingredients, and you also select a grain to go with it which makes it a more substantial meal than I sometimes expect soup to be. Served with a pitta on the side, it was a yummy, comforting lunch for the winter’s day. We also enjoyed a cup of tea – served with your choice of a variety of plant-based milks. 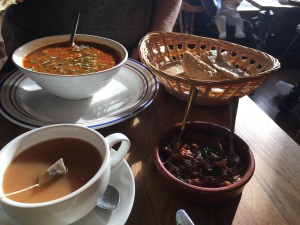 In the interests of the review (of course) I ordered the pancakes for us to share too. They sounded delicious on the menu and I was not disappointed when they came out. The plate looked beautiful, and the portion was really generous. The pancakes themselves are a nice texture but what makes this dish so good is actually the stuff it’s served with. The fresh fruit was perfectly ripe and sweet, and compared to stuff I’ve been served before seemed to be good quality. The pancakes were served with a big dish of vegan yoghurt and a very generous glug of maple syrup. It was so incredibly sweet, I probably wouldn’t order these for breakfast, but it was a truly delicious afternoon treat.

On my next visit only a few days later, I arrived at around 11.30am on a Saturday to treat myself to breakfast, and next time I’ll know to get there early! The place was packed, with every seat taken and a queue at the counter. Things seemed a little chaotic and probably that’s fair enough, with the cafe and staff still very much finding their feet having just opened. The owner, Sam, was super apologetic to everyone for their wait (although I didn’t feel I had to wait particularly longer than I would expect anyway!) and everyone still received a really attentive service.

The vegan breakfast itself was delicious and incredibly filling, particularly great value for the price. This has got to be the go-to place for any veggie students with a hangover this term! A big plate with falafel, beans, mushrooms, hash browns, houmous, spinach, and a tomato, are served with a portion of toast on the side. Everything was really tasty, though at varying degrees of warmth – sadly the mushrooms particularly were a bit cold. Considering how recently opened the place is, I expect the staff are still getting to grips with the busy lunchtime rush, so I can forgive it – hopefully little things like this will improve quite quickly! Also on the menu is a tofu and spinach scramble which sounded beautiful, and I can’t wait to try next time.

Rick’s Vegetarian should be a vegan’s go to for brunch in Oxford. There may be other cafes with vegan options (and limited at best anyway) but it’s great to show support to a vegan business. And you know, if you’re still feeling peckish afterwards, you can pop to Happy Friday Kitchen for dinner.