I’ve visited Banana Tree a couple of times before when I wasn’t vegan, and felt that it was quite hit and miss – if you ordered well, you’d love it, but if you made the wrong choice, you’d leave feeling pretty disappointed. Exploring the vegetarian menu though (most of which is also vegan), I found myself faced with way too many choices, all of which sounded pretty safe, and delicious. With help from Jamie, I set myself the task of seeing whether or not this was the case.

We nibbled on some sesame crackers while waiting for our food to arrive. It’s so nice to be able to take part in this because usually the non-vegans will be munching on prawn crackers and you’ll be left ready for your starter to arrive already.

All of the starters on the vegetarian menu are also vegan. We tried the street style crispy dough, which seemed to be Indochinese style doughballs. When they arrived, they were little chunks of deep fried dough, crispy, but surprisingly light and not too greasy. They were served with a Kajang Satay sauce, which for a peanut butter lover like me was heavenly. For the price, and indeed for only one person, this would be a pretty large starter, especially as it is quite filling. I wasn’t sure I’d order it again because it literally is just deep fried carbs, but Jamie, not being so worried about that kind of thing, said he loved it and he’d definitely choose it next time. 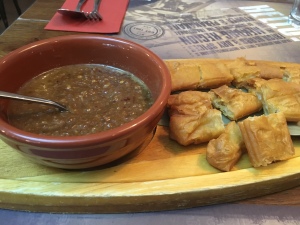 The aromatic aubergine half was smothered in a deep, sweet sauce. The skin was beautifully caramelised then the flesh just melted away. The sauce service was generous and the flavour of the aubergine blew me away, by far one of the tastiest I’ve had (sorry Thali). It comes served with a little fresh salad and some crispy shallots for a bit of added texture. I really enjoyed this starter, the only downside was that the sauce, though tasty, was pretty greasy.

The Vegan Monk’s Springrolls came with a little card explaining how to make up the wraps, which was a nice touch for any newbies to this type of food and weren’t quite sure on the etiquette (us pretty much included). Wrapping your crispy spring roll inside a large lettuce leaf, along with some fresh mint and coriander, and lightly pickled carrot and cabbage, ensures maximum flavour, and these were delicious dipped into the accompanying sauce. The spring rolls seemed well cooked, with the filling of veggies and rice noodles nice and fresh, and the pastry crispy and not too oily. They did look like they were prepared in house too (whether that’s the case or not I don’t actually know) or at least were definitely handmade as they were neat but not all uniform, and certainly nothing like the ones you get from your local takeaway.

For the main course, I decided to try Banana Tree’s limited edition pak choi noodle soup, launched for Veganuary and also as a healthier option for those new year’s resolutioners. You’ll have to head to Banana Tree ASAP if you want to try it, because it’s only on the menu until February 10th. Saying that, it was probably the dish I was least excited about out of all the things we tried. The large bowl of vegetable broth came filled with rice noodles, lightly cooked crunchy veggies, and chilli if desired. I added some of the chilli oil and plenty of fresh chilli because honestly the soup itself didn’t have too much flavour, it was just very salty. The pieces of puffed tofu had taken on a bit of flavour and were nice, but there were only four pieces! Perhaps this is to keep the calories down, but the sceptic in me supposes it makes this quite an inexpensive dish to prepare. I enjoyed the pak choi and veggies but otherwise I could take or leave this meal. 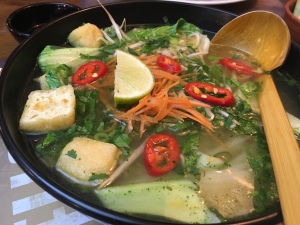 Jamie ordered the chilli, ginger, and basil tofu stir fry, which he upgraded to the vegan combo. For an extra £3.95 you can add a house salad, a couple of sweetcorn cakes, some more sesame crackers, and a portion of aromatic rice, making this a complete and rather large meal at a very decent overall price. Along with the tofu, the stir fry came with brocolli, baby corn, peppers, cloud ear mushrooms, and bamboo shoots. Unlike with my main course, Jamie’s dish was absolutely packed with flavour. The stir fry sauce was sticky and sweet, and the tofu had absorbed that beautifully. The rice was flavoured with lemongrass but it wasn’t overpowering, and when mixed with the flavours from the stir fry it was very tasty. Jamie even enjoyed the side salad (unusual for him) which was topped with crushed peanuts and crispy shallots, making it a bit more exciting than the normal pile of leaves. 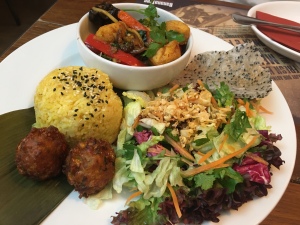 We managed to have room to try a few of the side dishes too, most of which are vegan (though admittedly we only had a few small bites before taking the rest home to eat as leftovers later)! My favourite was definitely the broccoli, baby corn, and cashews, stir fried in a delicious garlicky sauce. It’s quite expensive for a side at £6.45 but I could quite happily order this along with some rice and call it a main meal – and in fact I’m very tempted to do that when I next visit. The veggies were crunchy, the cashews added a hint of nutty sweetness. Its a simple but beautiful dish (maybe I’m easily pleased, but I do love broccoli). 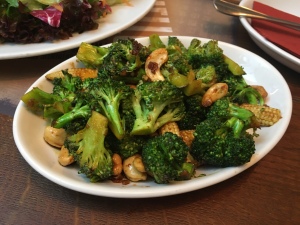 On the complete other end of the spectrum was the palm leaf sticky rice. The presentation is cute but Jamie and I did not get on with this dish at all. I think this might come down to personal preference but the texture and even the relatively plain flavour of these stodgy, starchy balls of rice was just unpleasant. We took some home and it was even worse cold – you know I hate food waste, but I actually ended up throwing some of it away. Much preferred the aromatic rice that came with Jamie’s stir fry, which is also actually cheaper when ordered as a side. 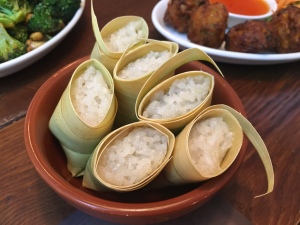 The last side we ordered, so that I could try some too, were the Sweet Corn Cakes with sweet chilli dip. I really loved these and would definitely order a vegan combo next time so I could have some with my meal. The little patties of corn and some other mixed veg were crispy on the outside but kind of sticky in the middle. They are really comforting and satisfying. You get four in a portion, along with some salad, and I think this is a much better value and thoroughly enjoyable side dish.

We were far, far too full from this savoury feast to even contemplate dessert, which is where Banana Tree lets the side down a little, with only a raspberry or mango sorbet on offer for vegans. I’d suggest don’t bother worrying about pudding though because there are way too many other delicious things on the menu that you might be missing out on if you attempt to save room! Plenty of the savoury options also offer something for the sweet tooth too.

The atmosphere and service at Banana Tree was wonderful, and we spent a really lovely couple of hours enjoying our meal at a nice pace. I think the experience here is good value for money, and even better if you can download a discount voucher from their website or social media, or visit on weekdays before 5pm while they’re offering a lunchtime deal.

We dined at Banana Tree on the house, but this is an honest account of my thoughts on their vegan menu.