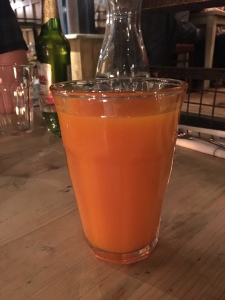 I’ve been a Bill’s customer since well before I was vegan, and it’s a good place to have a family gathering as they seem to cater well for a big variety of dietary requirements. I probably haven’t been since last Christmas though, so was happy to be invited along by them to try a couple of their newer vegan dishes on the menu, including their festive specials.

I visited on a pretty miserable weeknight with my boyfriend, and we were both looking forward to something warming and hearty. We received a really nice welcome and were seated straightaway. I was suffering from the beginnings of a cold – luckily it hadn’t yet impacted my tastebuds – and spied an Apple, Carrot and Ginger juice on the menu which sounded like exactly what I needed. When it came, I was happy that it had the right balance of sweetness versus fiery ginger, was refreshing and definitely hit the spot.

There is a vegan option for each course on the festive menu, so Jamie ordered from that, but rather than having an identical meal I decided to give some of the options from their regular menu a try. We were both feeling pretty hungry after long days at work so we ordered some bread to snack on too while waiting for our food to be prepared. We opted for the roasted garlic and herb bread, and it looked like a nice portion size for two sharing. Coated with olive oil and plenty of garlic, it was fluffy on the inside with a crisp crust. A sprinkle of rosemary on the top made it a lovely start to the meal. The service was really great throughout the whole evening, and we hadn’t quite polished off the bread before our starters arrived.

Jamie ordered the wild mushroom soup from the festive menu. It came with a hefty wedge of more bread, this time toasted foccacia. For me, it looked a little over-toasted, and the bite I took reminded me of a giant crouton as it was quite well-oiled too. However Jamie really liked it so it must be down to personal taste! The soup itself was creamy but not too thick and filling, as you’d want from a starter of a three course meal. The portion size was spot on as well. The chunks of chewy mushrooms and bits of onion added texture, and there were plenty of them, it wasn’t just a token couple sprinkled on the top.

I’d ordered the courgette and mint fritters, a handful of which were served on a couple of fresh, crisp gem lettuce leaves. The fritters were very soft in the middle and had a dark, crispy outside, though they weren’t burnt. I really enjoyed the texture, it was creamy when you bit into it. They had a very mild minty flavour, and the whole thing tasted quite refreshing despite them presumably having been fried. The purple basil and pine nut pesto was earthy and prevented the dish from becoming dry. It added a nice colour to the plate too and they’d included just the right amount of sauce. I’m not a big fan of regular pesto but the different flavours in this one were quite enjoyable.

For my main, I wanted to try the ‘Bill’s Wellington’ which I’d been eyeing up for a while, pastry packed with a carrot, cashew and mushroom filling. So I would say now having seen it that this is actually a pie or a pasty rather than a wellington, but I guess it’s just semantics – essentially its a big ball of stuffing encased in pastry. The filling itelf was really tasty, with sweet chunky bits of carrot surrounded by the mushroom and cashew nut mixture, which had a mild flavour but was seasoned well and was very enjoyable.

My pastry was very crisp and while there was no soggy bottom in sight I’d say it was on the overdone side. The wellington was served on a bed of butterbean mash. The flavour went quite well in contrast to the sweetness of the pastry’s filling, but can I ask this about butterbean mash – why? What is wrong with a fluffy vegan mashed potato? I’ve made mash with butterbeans at home once before and obviously the one prepared by the restaurant was much smoother and better done but there is no escaping that slightly powdery texture and the fact that it just isn’t the mashed potato that most people would be craving with this pie dish. But I comforted myself in the knowledge that it’d added another portion of my five a day to the plate, and don’t get me wrong it was perfectly fine, I just thought potato would’ve been nicer.

Jamie had ordered the vegan roast dinner, a pumpkin, fig, and chestnut roast with roasties and cavolo nero. At least, that’s what we thought he ordered, but when it came it was the nut roast served on the same bed of butterbean mash and side of tenderstem broccoli as my own main. The roast potatoes had sold the dish to him so we checked with a waitress walking past whether we’d misunderstood the menu. Essentially they have a couple of different versions of this same dish on the menu, and the chef had plated up a different version to the one we were hoping to try. The staff were super apologetic and said they’d make the roast vegetables and sauteed wild mushrooms as a side and get it to him as soon as possible. They also offered us free drinks to make up for it which we really appreciated as it wasn’t a major mistake – and I should add at this point that they didn’t realise we were already receiving a complimentary meal, so it shows their customer service genuinely is very good.

Jamie decided to start his food anyway while it was still warm. The broccoli on both of our plates was nicely cooked. The nut roast itself was again quite sweet thanks to the fig, with a pleasant texture from the decent sized chunks of chestnut. When the side of mushrooms arrived, I could see how they would add some ‘meatiness’ to the dish. Everything was smothered in a rich red wine gravy which brought it together and was one of the best things about the plates of food (though the little gravy boats could’ve done with a dash more in them). When Jamie’s roast potatoes did arrive, they were a little underwhelming, as they weren’t particularly crispy at all, though we wondered whether it was due to the haste with which these one had had to be cooked. Jamie had made us roast potatoes at the weekend and honestly his were much better.

Both of our plates, despite me thinking originally that the portion sizes were kind of small, were very filling, and definitely fulfilled our requirements for some proper wholesome winter food. They weren’t perfect meals but it was enjoyable, comforting, and there is a lot to be said for the atmosphere too because it felt like a really lovely place to have an evening out (apologies for the quality of the photos due to the cosy low lighting). 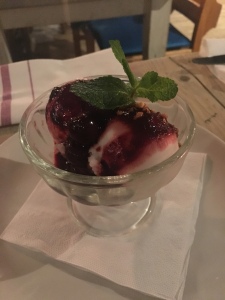 We were really full by this point thanks to our carb overload, so we decided to just share Jamie’s dessert from the three course Christmas meal. I was sad to see that after last year’s slightly more interesting vegan pudding, Bill’s have downgraded back to sorbet territory. They tried to jazz it up with some cherries in Kirsch, but ultimately it’s a lemon sorbet. We thought it might be an okay end to a rich meal by cleansing the palette but sadly it wasn’t even that. Obviously I have had many a lemon sorbet but this one genuinely tasted like a frozen lemsip, it was so bitter. Add to that the cherries which were so soaked in booze they were also very bitter and provided no sweetness to offset it. There were some crushed hazelnuts which added texture but the flavours didn’t really work. Even a crushed biscuit would’ve been better as that would’ve added some sweetness. You know how some sorbets are smooth and even creamy? This was not one of those. I am shivering while writing this because it had that texture where you drag the spoon through and you can feel the ice crystals, that feeling that sets your teeth on edge. This was just a really awful pudding and such a shame to end the meal on this note! I noticed that there is no two course option on their Christmas menu this year, so some poor vegan has no choice but to pay £28 and have this ‘dessert’, rather than save themselves some money and go for the starter and main which were both very enjoyable. Meanwhile everyone else will be tucking into their bread and butter pudding or cheesecake for the same price. It’s really not that hard to do a vegan dessert and I don’t think there’s an excuse for this.

It may not sound like it following that paragraph, but overall we both really did enjoy our meals at Bill’s. The service was wonderful (thank you particularly to Emma) and based on the quality of our savoury courses I would happily go back. As you might expect, I will avoid ordering a pudding from Bill’s for the time being, but by the time we got to the dessert we were both so full that I think we should have ended the meal at that point anyway. This is a plea for the recipe development team at Bill’s to come up with something a bit more exciting for pudding!

Bill’s invited us for a complimentary meal for two, all thoughts shared here are my own.

Wow it’s suddenly been a while, hi everyone 👋🏼 There’s been so much going on recently insta has definitely taken a back seat.
Photo dump from my long weekend away with family 🏖 swipe for puppy cuddles! 🐶
Dreaming of @doughnuttime_uk 💭
*Finally* got myself the @wasabi_uk zalmon sushi set [a d\p r ] 🍣 SWIPE for a closer look 🥢
Spicy fajita mix with tofu and homemade wedges 🌶 such a quick meal to make on a weeknight, definitely recommend! 😋
The classic overnight oats 🥣 made with @thecollectiveuk fudge Greek-style yoghurt (ad-pr sample) Genuinely don’t think I’ll need to buy any other dairy-free yoghurt again because theirs is so so good 😋