#Veganuary Day 22 🍰 so it really doesn’t look like much 😂 but this lemon loaf cake is one of my favesss to eat 🍋 it’s made with @alpro vanilla soya yoghurt and olive oil so it’s so soft, moist and delicious 😋 Yet ANOTHER fab recipe from @lucywatson 👏 . #VeganBaking really doesn’t have to be difficult! This was just as easy as baking with animal products except no risk of food poisoning if you eat the batter out the bowl 😄 and most importantly completely #CrueltyFree 💓 . I used to bake all the time but I really struggle to find the time now. What should I bake next? 🍪 🧁 🍞 . #veganuary2020 #veganism #vegancake #veganjunkfood #veganrecipes #veganblogger #oxfordvegans #oxfordblogger #vegansofig #vegansofinstagram #veganlife #veganlifestyle #whatveganseat #cake #baking #easyvegan #vegangirl #lemoncake #loafcake
#Veganuary Day 21 🍆 . Yeah I really mean aubergine though! This bowl was inspired by two @deliciouslyella recipes 😋 a maple-miso toasted aubergine 😍 on a bed of wilted kale and apple salad 🥗 has anyone tried massaging kale? I was getting hand cramp before it started to wilt 😂 worth it though, with a generous drizzle of tahini (@belazu is my absolute fave), lemon juice 🍋 & plenty of salt & pepper 🧂 then a grated 🍎 I don’t know why I’m so enthusiastic about a salad but it tastes great and I’m looking forward to lunch 🍴 . #veganuary2020 #vegan #veganfood #salad #wholefoods #wholefoodplantbased #plantbased #wfpb #health #healthy #healthyfood #mealprep #veganmealprep #veganfoodshare #veganlife #veganlifestyle #vegansofig #vegansofinstagram #veggies #vegetarian #veganrecipes #veganblogger #oxfordvegans #oxfordblogger
#Veganuary Day 20 🍜 healthy, veggie-packed #stirfry on the menu 😋 this one was actually also protein-packed too because we got inventive with a @lindamccartneyfoods duck pancakes pack 😆 they were on special offer and I hadn’t tried it before so just had to buy! However we ended up throwing the mock duck into this stir fry, along with mushrooms 🍄 pepper 🌶 onion 🧅 and beansprouts 🌱 then making up the little pancake rolls will all of this filling 👍 the hoisin sauce was great too. Would recommend but think the kit is a little pricey when it’s not on discount. Have you tried it? 😋 . #veganuary2020 #vegan #veganism #veganfood #veganfoodshare #whatveganseat #healthyvegan #healthyveganfood #healthyfood #veggies #vegetarian #veganrecipe #veganlife #veganlifestyle #vegansofig #vegansofinstagram #freefrom #wfpb #wholefoods #veganblogger #vegangirl #veganbowl #oxfordvegans #oxfordblogger
#Veganuary Day 19 🍔 & it’s another burger 😆 this time homemade using lentils & chickpeas - you can find the recipe in Lucy Watson’s Loving It Vegan recipe book. Swipe to see the fillings 🥑 In case you didn’t see it already, I’ve written a round up of my fave #vegan recipe books on veganeatsoxford.com & no surprises that it features! Go check out the blog to read my other recommendations 📚 . Would you look at those mini roasties 😍 @jamie_laxton_dop specials 👏 . #veganism #whatveganseat #vegandinner #veganburger #veganjunkfood #junkfood #veganlife #veganlifestyle #vegansofig #vegansofinstagram #easyvegan #plantbased #freefrom #veganblogger #veganrecipes #oxfordblogger #veganfood #veganfoodporn #veganfoodshare #veggies

Bella Italia is one of those ‘Italian’ chains I’ve meant to get to for a while, repping a separate vegan menu with options for every course of your meal. Bizarrely (or perhaps not when you consider it’s next door to the theatre) I’ve actually struggled to get a table. Twice I’ve turned up at Bella Italia, early on a weeknight, to be turned away because I didn’t have a booking. “But.. it’s Bella Italia…” I said incredulously to Jamie at our previous attempt, “how can they possibly be fully booked?”. Finally in late April, when our friends reached out to arrange a catch-up, they were organised enough to actually book a table for the four of us, and we visited on a Tuesday to use our Meerkat Meals privileges.

I managed to persuade everyone in the interests of my review, and because we had buy one get one free on food, that we should all take advantage of ordering three courses. I was intrigued by the vegan polpette, which definitely sounded like something a little different from the standard vegan starter you find at these kinds of places, though that’s not to say a vegan garlic bread wouldn’t go amiss! The ‘meatballs’ arrived in a small bowl with a piece of bread balanced on the edge. The shape of the bowl made it not the easiest thing to eat, it would’ve been better with a side plate for the bread. I thought it was the right size for a starter though and a nice start to the meal. The balls themselves were less meaty than I was expecting, having bought meat-replacement meatballs to eat at home before, these were more like falafel. They were seasoned quite nicely and the tomato sauce was tasty, but there could’ve been a bit more of it, as along with the un-buttered toast, the dish felt slightly dry. My friend ordered the other vegan starter available, the bruschetta with tomatoes, which is the less original dish that I’ve seen on a fair few chain menus – Zizzi, Ask Italian, etc. It looked surprisingly appealing on arrival with the vibrant red and green from the toppings. Olivia seemed to enjoy it, though she said the tomatoes weren’t the most flavourful. It’s not really something I’d order myself and I hope that restaurants are moving in the direction of more adventurous things!

Onto our mains, and I like that there is a vegan option on pretty much every main course section, so whether you’re looking for a pasta, pizza, or risotto dish, you can find one. I might’ve gone for the risotto but I’d had one for dinner the night before, so decided to be pretty unadventurous and go for the lentil & mushroom ragu. Again, it was a very good sized portion, albeit splashed in the big bowl with absolutely no attention to presentation whatsoever (I’ve seen Masterchef, I thought you were supposed to at least clean the sauce splashes off the side of the bowl before service)! It was exactly what you’d expect from a spag bol from this kind of place. The sauce wasn’t anything particularly special, though at least they seemed to have got the right amount of it for the spaghetti. The lentils were al dente, a few I felt that probably weren’t quite cooked through. I could definitely make something with more flavour at home, but these kinds of restaurants and their dishes are literally designed for the bland British palate. It did what it was supposed to do in that I focused much more on the conversation at the table than the food, which was a pretty average, home-cooking style bowl of comforting carbs. 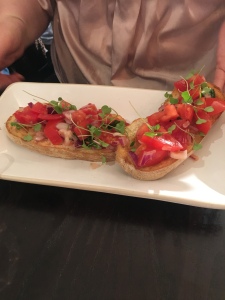 No sooner had our plates been cleared than Jamie and I were eager to order ourselves a lemon cheesecake each. Alas, when we were brought the dessert menus we were told the words no vegan wants to hear. “We only have two vegan desserts and unfortunately we’re out of the cheesecake”, the second ‘dessert’ being a scoop of sorbet. I cursed my bad luck with Bella Italia, as all of the times I had tried to get in here, I’d almost solely been sold on the basis of this dessert. We watched as our friends tucked into their own sickly sweet, buy one get one free desserts, while we went without. I’ll know to ask about the cheesecake’s availability on arrival next time – if there ever is a next time.

Our bill for four came in around the fairly reasonably £55 mark. You better believe they’re making up for the Meerkat Meals deal by ramping up the profit margins on the drinks (£2.90 for a small Diet Coke). I prefer to drink tap water anyway. While my food was adequate, I certainly wouldn’t want to pay full price here, as with most of these chain restaurants, the quality just isn’t there. It wasn’t an unpleasant experience by any means though, with our waitress being really friendly, the food coming out quickly, and a fairly nice atmosphere, if a little loud. If you’ve got yourself some kind of discount voucher, and you’ve made sure to book yourself a table, I think you’ll have a decent enough evening.

One thought on “Review: Bella Italia”