I feel sad about posting this review. As it’s only the second vegan restaurant to open in Oxford, I was really excited to visit Delhish Vegan Kitchen and to give my support to a new independent vegan business. Unfortunately, based on our experience when we visited for Valentine’s Day, I don’t feel able to recommend it. I’m so confused because I see some positive reviews on Tripadvisor from the opening week, and perhaps we were just unlucky and visited them on an off night, but both the food and the service left so much to be desired. 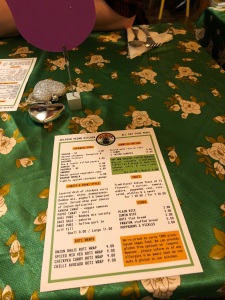 Delhish Vegan Kitchen has taken over the old Cous Cous Cafe premises on St Clements Street, a short walk from the city centre. They’ve given the walls a fresh lick of paint but the effort was a little undermined by the cheap tablecloths slipping around, and plastic heart shaped Christmas tree decorations on the table (I get that they wanted to make some kind of romantic ambience for Valentines Day, but a simple tealight would’ve been fine). The restaurant had taken a lot of reservations for the occasion, probably too many. We were seated at what was essentially a four person table, next to another couple, which already felt a bit intrusive. A round table the other side of us was laid out with twice as many places as it looked like would comfortably fit. Every table had a reserved sign on, which is a promising start for a newly opened business outside of the city centre, but we shared the restaurant with only a handful of people for the duration of our meal. You could hear bangs and crashes from the kitchen beyond the wall behind us, and the couple next to us eventually had to leave before most of their food arrived because they’d been made to wait so long. Not filling us with confidence about the meal we had to look forward to. 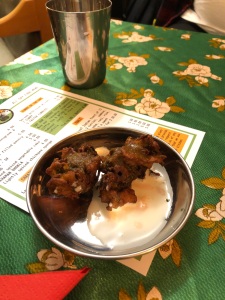 Perhaps there was a mix up with their particular order though, because it didn’t take too long for our own food to arrive. The waitress was presumably new and hadn’t received much training because she dumped a small dish of something or other on the table, without saying a word. We’d ordered the thali, which looked like it came served in one big tray, so we weren’t expecting anything to come first separately and had no idea what it was. We’ve decided it was probably the pakora, crisp and nicely spiced. Taste-wise, if you avoided the watery yoghurt pictured, it was actually a fairly promising start to the meal.

A different waiter came about 10 minutes later with our main, explaining when he put down the food that the three tiny dishes of curry were tasters and they’d bring us out as much refills of that as we liked. There are some communication issues with the staff because a table across the room had ordered the same as us, but they hadn’t had this explained to them, so were understandably a bit put out by the small size of their meal until they realised they could order more.

I was super hungry after a long day in the office so decided to dive into the curries. The first, an aubergine curry, was very mild, and I couldn’t put my finger on the flavour. I love aubergine, it is one of my favourite things to eat, but after a couple of mouthfuls I really didn’t want to eat any more. The fruit was cooked down for so long that it was a stringy mush, retaining no texture, and just not that pleasant to eat. Next, a chickpea curry, which was incredibly watery, and the chickpeas tasted like they’d just been tipped into the pan right before serving, so just bland boiled chickpeas. Again, there was something about it that just put me off taking more than a couple of mouthfuls. The final curry was a potato curry, which was my preferred of the three, but was incredibly spicy, so much so that it was mostly heat rather than flavour. I hate food waste, so I was glad that we were only served small bowls, because between the two of us we still left a few spoonfuls.

As for the accompaniments, I enjoyed the samosa, although Jamie said his was way spicier, so I think there are some consistency issues – to be expected with this style of home cooked food, but probably not to the extent that ours differed. The rice was well cooked and nicely seasoned, and I contemplated just ordering a few more bowls of that to fill up my far from full stomach. The single poppadom between two of us was also nice, though I think they could’ve afforded to give you another from the start. The different breads were similarly tasty, though going dry without any tasty curry sauce to scoop up. The big bowl of yoghurt dip in the middle was, to me, inedible. It came with a salad of diced raw carrot and red cabbage, which I didn’t mind eating, for the sake of not wasting it, where it wasn’t contaminated with the sauce, but again it wasn’t particularly enjoyable. The other bits on the plate were difficult to identify, and none of them made us want to order more. The ‘sweet’ advertised as coming with the thali was a tiny little bowl of Alpro vanilla yoghurt with a blob of mango puree. It was barely a dessert for one person, let alone two, but it wasn’t tasty enough for either of us to fight over it.

The thali for two people comes in at £38, and sadly the more I think about it the more I feel we were really ripped off. Honestly this is more than I’d ordinarily want to pay for a single course meal with sides and particularly with this meal, as we’d eaten so little, and the quality wasn’t there. It felt like I’d gone to someone’s house for dinner and politely done my best to clear my plate, except I’d had to pay (a lot) for the privilege. As Jamie noted, ‘think of the takeaways we could’ve ordered for this’! You can even get a two course fine dining style meal at Cinnamon Kitchen on the rooftop terrace in the Westgate for the same price. Perhaps there are some other lovely options on the menu at Delhish at more reasonable prices, but unfortunately based on our experience, I won’t be going back any time soon.