Launching just in time for the UK to go into lockdown, Bombay Express Oxford is a relatively new Indian delivery service in Oxford, offering something that I haven’t seen any others around here doing yet – plentiful vegan options with most importantly a clearly labelled menu. Bombay Express told me that they want their menu to reflect the fact that vegetarian and vegan food is abundant in Indian cuisine, and it doesn’t have to be as boring as people might perceive it, and I was so grateful that they reached out to me to share their food with us during this time!

Early this week they dropped off a takeaway showcasing a handful of their vegan options. There was so much food, but still so much more on the menu yet to try, which is amazing. The food arrived very quickly, which was perfect for a weeknight after a long day of being shut up in my home office, and I’ve been told about similarly great service by others who’ve ordered from them on Just Eat. Everything was piping hot, looked and smelled really enticing, and I couldn’t wait to tuck in.

The first dish on the menu was a vegan variation of channa chaat (vegan because it comes without the yoghurt it would usually be served with – and I just happened to have some plain soya yoghurt in the fridge which would’ve worked perfectly). It was a refreshing warm salad, mostly chickpeas, mixed with red onion, fresh tomatoes and cucumber. A sweet sticky tamarind sauce coated the veggies, and then a burst of chilli heat cut through to leave a tingling mouth-feel. It was different from anything I’ve ordered from an Indian takeaway before and I really enjoyed it.

Next we tried the courgette biran, again something different from what I’ve seen on other takeaway menus (although perhaps I’ve never been looking for it?). It was an Indian stir fry, with the courgettes pan fried together with fresh tomatoes, peppers, onion and garlic. The vegetables were all perfectly cooked for me, they hadn’t turned to mush at all so retained a nice texture, with lots of flavour from the rich mildly spiced tomato sauce. This dish would be pretty simple to put together at home yourself but the Bombay Express prices are very reasonable, so for the sake of an evening off cooking I think it’d be worth it.

A dish that many will be more familiar with and I’ve ordered from various places before is the saag aloo. This one isn’t served with a sauce but comes dry, and was really tasty. It was mildly spiced, and a little sweet with caramelised onion running through the dish. Such comfort food for me, this would be one of my go-to in future. Lastly, we tucked into the tarka dahl, a garlicky lentil curry. Dahl is a staple for us and I really enjoyed this one! It was a very creamy, mild sauce, really nicely seasoned with plenty of salt. For those who aren’t such a fan of spicy food, this is the dish for you, as it’s still warming and delicious with the garlic infused spiced lentils, without the chilli heat of some of the dishes on the menu. 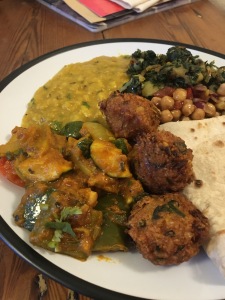 On the side of our curries we had deep fried lentil cakes, what felt and tasted to me like Indian-style falafel. It was a nice little addition and felt like a healthy alternative to the onion baji or samosas I might usually order. They weren’t super flavourful, and not the most inspiring thing out of everything we ate, but if you are a big falafel fan I think you should definitely give these a try. Also on the side, we enjoyed chapati, and again it made a nice change, as we’d usually order rice. I really liked scooping up the dahl with the bread, there was something so comforting about it, which is exactly what you want at these times. 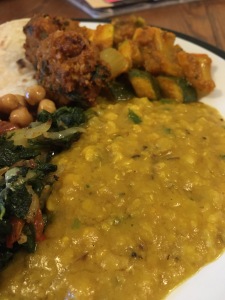 Our meal felt great quality for a takeaway Indian, compared to many I’ve had in Oxford. It wasn’t too greasy, everything felt nice and fresh. The veggies were all well cooked, no extra soft and mushy veg here, and nothing swimming in oily sauce. The labelling on the menu and my correspondence with the Bombay Express team gave me confidence that they really know what they’re doing when catering for vegans, so in future if I want a classic Indian with home delivery, they’ll be my first choice!

We received this complimentary meal from Bombay Express Oxford, all opinions expressed in the review are my honest impressions of the food.