Another day, another pizza!

Jamie and I had scheduled in an all-you-can-eat pizza sesh at Buongiorno e Buonasera for Monday evening and so had hung around in town for an hour or so after work until 6pm, when their unlimited pizza deal starts. Disappointingly, we were told on arrival that the offer could only be taken up by tables of three or more people. It was unfortunate that nowhere on the advertising boards I’d seen around town, or indeed on their own website, did it list that small detail – but sure enough the waitress presented me with a menu containing the information written at the bottom. Perhaps she’d also looked at Jamie and me and decided that between us we could probably manage three peoples’ worth of pizza while only paying for the price of two, and that it wouldn’t be a good move for their business. In any case, their loss was The White Rabbit’s gain, as we were determined to have pizza and happily this pub is just a handful of metres away (in fact, you can just about see Buongiorno e Buonasera in the background of the featured image for this post) and is famous for exactly that.

The White Rabbit seems like the perfect student hangout. It’s got a very relaxed pub atmosphere, with weekly entertainment including a quiz night and a ‘drunk drawing’ evening. You choose your table and place your order at the bar rather than being seated by a waiter. It’s quite a small pub and the place was packed when we arrived but we managed to squeeze ourselves into a booth table for two in the corner. A family of six who arrived shortly after we’d ordered went one further by squashing themselves into more or less the same amount of space next to us. You can’t book a table in advance unless you’re a very large party, but as it says on their website, they will usually be able to find a space for you.

The White Rabbit Vegana pizza is topped with sundried tomatoes, courgette, peppers, and rocket. For once I didn’t feel the need to swap any of the toppings for something else on their list because these ones were really well thought out and it sounded delicious as it was. I’m not sure what vegan cheese they use but it’s more similar to the ‘cheddar’ I’ve bought from Tesco/Sainsbury’s rather than the gooey mozzarisella that the chain restaurants use. However, I’ve certainly never been able to get the melty effect at home vegan cheddar like they did with this pizza. I’m going to go out on a limb and say this was the best pizza I’ve had since going vegan. The base was perfectly thin and crispy and the topping combination was so tasty, with the sundried tomatoes giving a burst of sweetness every now and again, balanced with the slight bitterness of the rocket. I’m sure you would be able to order some of the other vegetarian pizzas here and ask for vegan cheese instead, but for once I’d be perfectly happy ordering the vegan option every time without fuss. 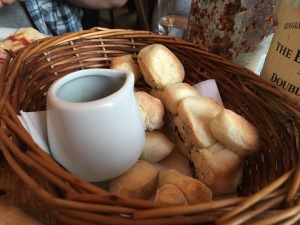 The whole menu is quite brief as the main focus is the pizza, but we ordered 16 doughballs from the starters list (8 for £3 or 16 for £4 – no brainer?) which actually arrived when we were around half way through our pizzas. They were served with either garlic butter or nutella, which I swapped out for balsamic vinegar. Of course there’s no real need to have a side of bread with your bread, but it’s nice to have the option and I’m definitely a carb lover! The healthier vegans amongst us could also order a side salad. There was only one dessert available, and it wasn’t SFV, but me and Jamie felt so full from the generously sized pizza that we weren’t worried about ordering dessert anyway. You can also ask for a box to take your leftovers away if you want to save some of the deliciousness for later. Tip for if you do fancy dessert though, The Organic Deli Cafe is right next door, and offers yummy wedges of vegan cake. It’s only open until 8pm on weekdays though (10pm Friday and Saturday), so you might want to pick your pudding up beforehand!

This is a great place for a casual dinner with friends or family, and could also be a fab choice for a no-pressure first date. With pizzas from £6.50 (though the Vegana is £9.95, which I still think is very reasonable), it’s a great budget option, with friendly and quick service, and it’s in the ideal location for taking in some theatre or a film afterwards. Can’t recommend this place enough, and I hope I’ll be visiting again very soon!

Good morning ☀️ you neeed to try this yoghurt 😋
Dreaming of this 💭 it feels like foreverr since we had a takeaway but probs is only 2 weeks max 😆
Simple but super yum breakfast 😋 as you can probably tell, most of my meals are anything but fancy. Being vegan doesn’t have to be complicated!
Ad-PR sample
Not a particularly weather appropriate meal but when is a roast not a good idea? 😋
🍔 Should I update my Brewdog review? 😻