#Veganuary Day 21 🍆 . Yeah I really mean aubergine though! This bowl was inspired by two @deliciouslyella recipes 😋 a maple-miso toasted aubergine 😍 on a bed of wilted kale and apple salad 🥗 has anyone tried massaging kale? I was getting hand cramp before it started to wilt 😂 worth it though, with a generous drizzle of tahini (@belazu is my absolute fave), lemon juice 🍋 & plenty of salt & pepper 🧂 then a grated 🍎 I don’t know why I’m so enthusiastic about a salad but it tastes great and I’m looking forward to lunch 🍴 . #veganuary2020 #vegan #veganfood #salad #wholefoods #wholefoodplantbased #plantbased #wfpb #health #healthy #healthyfood #mealprep #veganmealprep #veganfoodshare #veganlife #veganlifestyle #vegansofig #vegansofinstagram #veggies #vegetarian #veganrecipes #veganblogger #oxfordvegans #oxfordblogger
#Veganuary Day 20 🍜 healthy, veggie-packed #stirfry on the menu 😋 this one was actually also protein-packed too because we got inventive with a @lindamccartneyfoods duck pancakes pack 😆 they were on special offer and I hadn’t tried it before so just had to buy! However we ended up throwing the mock duck into this stir fry, along with mushrooms 🍄 pepper 🌶 onion 🧅 and beansprouts 🌱 then making up the little pancake rolls will all of this filling 👍 the hoisin sauce was great too. Would recommend but think the kit is a little pricey when it’s not on discount. Have you tried it? 😋 . #veganuary2020 #vegan #veganism #veganfood #veganfoodshare #whatveganseat #healthyvegan #healthyveganfood #healthyfood #veggies #vegetarian #veganrecipe #veganlife #veganlifestyle #vegansofig #vegansofinstagram #freefrom #wfpb #wholefoods #veganblogger #vegangirl #veganbowl #oxfordvegans #oxfordblogger
#Veganuary Day 19 🍔 & it’s another burger 😆 this time homemade using lentils & chickpeas - you can find the recipe in Lucy Watson’s Loving It Vegan recipe book. Swipe to see the fillings 🥑 In case you didn’t see it already, I’ve written a round up of my fave #vegan recipe books on veganeatsoxford.com & no surprises that it features! Go check out the blog to read my other recommendations 📚 . Would you look at those mini roasties 😍 @jamie_laxton_dop specials 👏 . #veganism #whatveganseat #vegandinner #veganburger #veganjunkfood #junkfood #veganlife #veganlifestyle #vegansofig #vegansofinstagram #easyvegan #plantbased #freefrom #veganblogger #veganrecipes #oxfordblogger #veganfood #veganfoodporn #veganfoodshare #veggies
#Veganuary Day 18 🌯 we used to have fajitas on the weekly, but it’s been a while!🥦 these ended up being quality 😋 I cheated with a sachet of fajita seasoning from sainsburys 🙈 but used Tesco’s new Wicked Kitchen oyster cluster mushrooms for the ‘meat’ and they worked so well 🙌 add some sliced fried onion 🧅 and peppers 🌶 top with #vegancheese and mayo if you like for a very quick & delicious meal 👍 and obviously for is it’s served with the obligatory sweet potato fries 🍠 ✌️ these wraps were gifted to me by @missionwrapsuk_ and they are yummy! . #vegan #veganism #veganfood #veganfoodshare #vegansofinstagram #vegansofig #veganlife #veganlifestyle #plantbased #dinner #healthyfood #healthyveganfood #healthy #veganblogger #oxfordvegans #oxfordblogger #veggies #vegetarian #veganrecipe #easyvegan #veganuary2020

Just a little way up Cowley Road from The Plain is an unassuming little Turkish and Mediterranean restaurant called Oxford’s Grill. With it’s red and white plastic store front sign, it really doesn’t look like much, and regretfully despite having seen a few good things written about it online, it hadn’t been top of my list of places to visit. The time came however when a friend who doesn’t like ‘spicy food’ was visiting Oxford (and I mean this guy won’t even eat a Korma) and I thought it’d be a good opportunity to try it out, as I was sure he could find something he could eat from the menu.

At a first glance online, the menu also looks like a relative vegan haven – as this kind of cuisine can be, featuring lots of veggie mezze. I had identified more dishes that I wanted to try than I’d be able to reasonably eat in one sitting. Sadly however when it came to ordering, my hopes were dashed a little bit. The really great thing was that the people in the restaurant obviously all know the menu really well, it’s freshly cooked, they know what went in it, and everyone, not just the chef, is clued up on it.

Before our order had even been taken, we were brought a big bowl of complimentary bread and humus to share. I was suspicious of the bread so decided to check, and yes, it had ‘only a little bit’ (sigh – then what’s the point?) of butter in it, so I had nothing to dip in the homemade humus other than my little finger. They did however very kindly offer to bring out some vegetables to dip instead, but I knew I was about to eat a bunch of food so I said not to worry. When ordering, I asked about a couple of different mushroom dishes and the fried potato balls, to be told they weren’t suitable for vegans. I ended up deciding on the Imam Bayildi for my main, and was also advised that the rice it was served with contained dairy, so I opted for chips instead.

While I would’ve preferred to have been a bit healthier with just boiled rice, and I’m not really sure why they couldn’t offer that, man the chips were good! Probably just because I don’t have fries that often, but I really did enjoy the meal. The portion size was extremely generous too. The Imam Bayildi came out slightly different from what I was expecting, as on the menu it’s described as a stuffed roasted aubergine, but it was more like a ratattouille with diced aubergine, onion, and pepper. Regardless, the flavour was delicious, it was very warming, comforting and tasty. The vegetables were so nicely cooked and just kid of melted in your mouth. Also, at £7.95 for this massive plate of food, it’s definitely one of the best value quality dinners you can find on Cowley Road. I’ve just realised while writing this that I could definitely do a round-up post of Oxford’s best aubergine dishes, I’ve tried so many now!

Because one dish is never enough for me, I also ordered the falafel. They were little sausage shapes rather than balls, and green because they were made with broad beans as well as chickpeas – and they were quite minty too. I really enjoyed the flavour and was happy to have something to dip in the coveted humus which I’d been eyeing up since we arrived. The falafel were perfect dunked in the creamy, garlicky dip. These along with my main was definitely too much carby food for a girl my size but I didn’t regret it one bit. 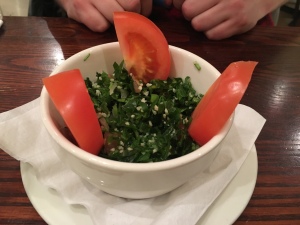 I also ordered a tabbouleh salad on the side, which was interesting as it was different from the other few times I’ve tried this dish in terms of the ratio of cracked wheat to herbs. It was super refreshing, but this was pretty much just a bowl of finely chopped parsley with a minuscule amount of wheat, mint and red onion mixed in. To be fair, that is exactly how it’s described on the menu and I did enjoy it as a more healthy accompaniment to my chips, so don’t really have any complaints! Also, no vegan puddings to finish off your meal with unfortunately but my stomach probably would’ve breathed a sigh of relief at that.

The people I came with both ordered meat dishes but we were all impressed with the great value of the food and said we’d come back again. We just had a really nice evening, the service was brilliant, and food delicious so you couldn’t really ask for more. I would highlight that it’s definitely worth checking with the waiter whether the dish you think should be vegan is actually vegan, because there are probably a few more deceptive things on the menu. This does mean also that maybe there isn’t quite so much choice on the menu for vegans as it first appears – but I think you could make a few different meal combinations out of the starters/mezze if you wanted, or ordering what I had for the main course is also a great option. To anyone who hasn’t discovered Oxford’s Grill yet, I’d recommend giving it a try!