A last-minute tip off from a friend led me to learn that The Folly was launching a vegan tasting menu, the test run being last Sunday evening. I wouldn’t ordinarily be looking out for vegan events at The Folly as they have nothing vegan-friendly on their regular dining menu at all, but a look at the tasting menu suggested this had the makings of a really great experience, so I was happy to be able to make a late notice booking for two to try it out.

On arrival, you could tell that The Folly had definitely done their research (or probably at least have a staff member who is vegan). A vegan wine list was already on the table, and our waitress let us know that they also had some vegan beers and ciders available. The seven course menu was laid out too, reminding us of what we’d signed up for. The menu was definitely a celebration of fresh produce, and while I was excited at the prospect of trying some new and interesting things, my partner, a meat-eater and not especially a fan of vegetables, was a bit sceptical. 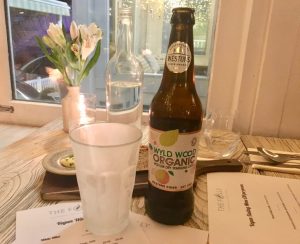 We were brought out some slices of bread and chive butter to nibble on while we waited for our first course, and despite knowing I was about to eat an indulgent amount of food the smell of the warm, fresh bread was really enticing. Always the suspicious vegan, I did think I’d better check that the spread was vegan. The waitress seemed pretty understanding of why I might ask, and assured me it was so I tucked right in.

First up was the amuse-bouche, roast baby leek with a romesco sauce. The waitress explained to us that the chef recommended we put the whole thing in our mouth in one go to get the full effect. The nutty sauce was slightly spicy, lightly salted, but the leek had a strong flavour so the sauce wasn’t too overpowering. It tasted good so suggested positive things about the courses to come.

Next on the menu was ‘textures of Jerusalem artichoke’ and I was definitely intrigued to find out what this was. What we were presented with was pretty attractive for a beige dish. The textures included a shallow bowl of creamy artichoke soup, which was warming and well-seasoned. The classy person that I am, I only knew I liked artichoke from having eaten it on a pizza, and I wasn’t expecting to love this dish as much as I did. The bowl was topped with compressed artichoke which had a more powerful flavour and a slight tang which complimented the milder soup. It also came with a few salted artichoke crisps adding a crunch, and some roasted almonds and garlic seed. Being towards the start of a seven course meal, I thought it was a pretty generous portion size too.

The second starter was a warm baby beetroot and avocado salad. Again, it looked beautiful on the plate. The nicely cooked beetroot was earthy and very sweet, but then the tang from the salad dressing as well as the spicy rocket cut through that nicely. We did find the addition of dried fruit and pomegranate jewels brought the dish almost to the side of too sweet, so it perhaps didn’t need quite so many different sweet elements. The creamy salted avocado on top was perfectly ripe, and I reluctantly ate Jamie’s too as he’s one of those weird avo-haters (I say reluctantly because I’d foolishly already consumed a whole avocado at lunch and while they are amazing and I love them, they are also pretty much balls of pure fat). A handful of quinoa added another element of texture to the dish and even more substance. I’d be happy with this as a small starter for a three course meal let alone as part of a seven course one.

Next up was a butternut squash carpaccio. This one also sounded really interesting from the menu and I was looking forward to seeing how it came out. It looked like a piece of art in how it had been put together, but sadly the dish just wasn’t for us when it came to the taste. Probably personal preference, but the pumpkin flavour from the raw butternut squash was too strong for me (while I love squash cooked). It was served with some candied beetroot which was very sweet, and some pickled apple with mustard seeds which were incredibly bitter in contrast. I gave it a go but had to leave a lot of that on my plate. The caramelised toasted seeds however were delicious and I made sure to distribute them so that I had some in every bite, making it just about palatable. 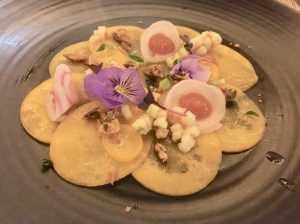 Onto the fifth and main course, and this was certainly the star of the show for Jamie as a non-vegan. It was a creamy risotto with little salt-baked celeriac spheres, truffle shavings, and a hazelnut crumb. As the bowls were brought over to our table, we could already smell the dish quite powerfully and it was really enticing. The risotto was actually scarily similar to its dairy-laden non-vegan counterpart, so if you’re missing cheese or cream this would definitely have been the meal for you, though for some people it might have been cheesy enough to be off putting. My favourite thing about it was the caramelised onion on top which just brought all the flavours together wonderfully. It was an incredibly rich and rather large bowl of food and I was already getting so full by this point that I gave Jamie the majority of mine. He wolfed it down and tells me he’s still thinking about how good it was days later.

Nearing the end of out meal, we moved on to the final two sweet courses. First was a palette-cleansing strawberry and black peppercorn sorbet. It was very fruity and sweet, pleasantly refreshing after the heaviness of the previous course. The flavours obviously being classic combinations, this was nicely done, and the amount of fiery peppercorn used made for a great balance of sweet and savoury.

Our meal was rounded off with a deconstructed apple and rhubarb crumble. Having watched anything ‘deconstructed’ being slated to varying degrees on Masterchef many times, I wasn’t sure what to expect. Also, apple crumble has been one of my favourite puddings since I was a child, and I feel like you probably aren’t going to beat mum’s homemade crumble and custard. While I’m not sure this dish quite managed that in the end, it was offering something different and nonetheless thoroughly enjoyable. You really won’t find me complaining about a pudding that involves deep fried stuff as well as a crumble topping. The fried apple balls were a little too greasy and made this course feel less refined than most of the other stuff we were served, but it was a playful dish and the idea definitely worked. Tangy apple and rhubarb cut through the sweetness perfectly. The vanilla custard was coconut-milk based and coloured with turmeric to give it that familiar custard colour (we could tell because it tasted a little too strongly of turmeric, though fine when eaten with all the other elements on the plate). The flavours really were lovely and it was a great way to finish off a thoroughly enjoyable meal. In the end, even Jamie was converted too.

The Folly has such a beautiful atmosphere and is in a fab location for enjoying what Oxford has to offer. The service we experienced was faultless, and obviously most importantly the food we ate was overall incredibly enjoyable, all in all making for a very special experience and one unique in Oxford at the moment. We were told that The Folly are hoping to do another vegan tasting menu in perhaps a month’s time, potentially with a slightly reduced menu at a lower price point, so I’ll definitely be keeping an eye out for it. The evening’s 7 courses were £39 per person, not including drinks, so it’s not the cheapest evening out in the world, but taking everything into consideration, I think you definitely get value for money. I politely suggested they might be interested in adding at least a couple of vegan options to their regular menu too if this is the type of cooking they’re exploring more, so we’ll have to see if there’s more to come from The Folly soon!

We dined as guests of The Folly, but all views are our own. This review first appeared on Bitten Oxford.