Followers of my Instagram will know that I’m a big fan of The Coconut Tree, on St Clement’s Street. In fact, whenever new followers send me a message asking for recommendations of where to eat, I will always tell them that the Sri Lankan bar/restaurant is my number one place to get good vegan food in Oxford. With that in mind, I was super happy to be invited back by the team for the launch of their new ‘cocotail’ menu, along with lots of yummy food. 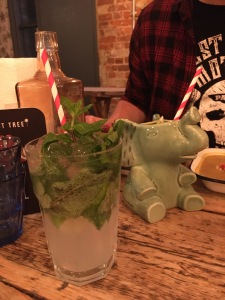 The food menu gets refreshed reasonably regularly, and I was excited to see a couple of new dishes that I hadn’t yet tried. Between Jamie and myself we ordered a good handful of vegan dishes (all clearly labelled and there’s an abundance of them, thank you very much) to enjoy along with our drinks. It even took us a while to decide what cocktails to order! They seemed less clear about which cocktails were vegan compared to the food, but our waiter kindly went and checked every single cocktail to confirm with us which ones were vegan-friendly. You might want to cross-check yourself with Barnivore as I’m not sure how they could’ve possibly checked whether all the ingredients were vegan in that space of time… anyway, the effort was there. I went for one that I was very sure was vegan, the mojito, which you can choose to be flavoured with a couple of different options, the recommended being coconut (of course) so I went for that. It was very sweet, a bit reminiscent of a pina colada with the super coconutty flavour. It had me feeling the holiday vibes, even on a cold dark night in Oxford. 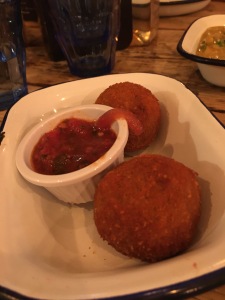 Jamie went for the classic Drunken Sri Lankan, their signature cocktail. They use native flavours like turmeric and lime, mixed with the fizz of ginger beer and the slight burn from the whisky. It went down a treat alongside the spicy food and it’s served in just the coolest elephant-shaped vessel. It’s not one of their new ones as it’s been a staple on the menu for ages, but it’s definitely one you need to order if you’re visiting for the first time!

Foodwise, our eyes were drawn straight away to one of the newer items on the menu, the jackfruit ‘cutlets’. There was some confusion when they arrived as we didn’t realise what they were and thought we’d been brought out something else by mistake. They came as perfectly round balls, fried in breadcrumbs – I suppose I was imagining something more like the Quorn breaded fillets you can buy in supermarkets. They had a real spicy kick to them when you bit in, though I think the inner mixture wasn’t quite evenly distributed as some bites were spicier than others, and one of the balls had more potato than jackfruit, and vice versa. Still they were really tasty, served with a flavourful and cooling sweet tomato relish. Great to see this ingredient popping up more on menus and being used in more interesting ways than just your standard pulled ‘pork’. 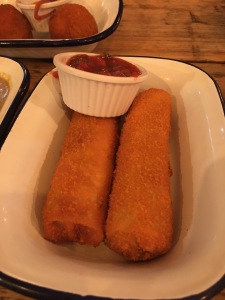 Another of the new dishes we’d ordered was the veg rolls, a peppery Sri Lankan style spring roll but coated again with super crispy breadcrumbs. The parcels were filled with spicy curried veg, it kind of reminded us of a next-level potato croquette. These were proper comfort food, and two of these large veg rolls was a great appetiser between the two of us for the rest of our meal. 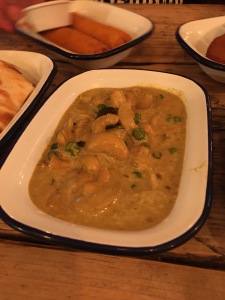 We each chose one of the curries, some of the classics which have always been go-to’s for me at The Coconut Tree! Jamie went for the dhal, which was super creamy and wholesome. The red lentils are stewed in coconut cream with some mild spices to make this filling, warming bowl. I chose the cashew nut curry, again soaked and cooked in coconut cream (there are a lot of really spicy dishes at TCT so we wanted a couple of tamer ones to balance it out). The soft cashews still retained a slight bite, then the sweet peas burst in your mouth, somehow not overcooked. The coconut curry sauce is delicious with pieces of soft roti dipped in. Both of these were such enjoyable dishes to eat! 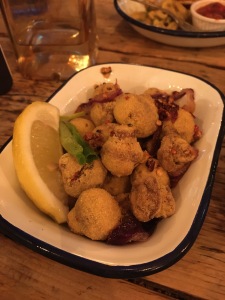 Alongside the curries, we’d ordered a side of hot battered mushrooms. The batter is aromatic, coating the meaty mushrooms which have retained all of their delicious flavour and texture. I love the crispy polenta coating, and it’s nice that they’ve used a few different ingredients across their different ‘battered’ dishes. The mushrooms are ‘hot’ in both senses of the word as we burnt our mouths in eagerness to eat them, and they have a nice sprinkling of chilli flakes on there. 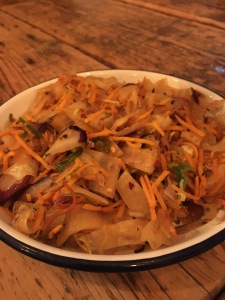 Last out was the vegan kotthu, and this I simply have to order every time I go. It remains my favourite thing on the menu, there’s something so deliciously simple but inviting about it. It’s like an oniony stir fry with lots of chopped up bread. It’s very filling on its own (we definitely took home lots of leftovers from our meal!) and great value, this would probably do me for lunch and it’s only £5.

We couldn’t resist checking out the dessert menu and spying a new vegan option on there. We didn’t have space on the table to try the new savoury vegan hopper, but we opted to share one of the treacle hoppers for pudding between us. I would really recommend saving yourself some room to try this! 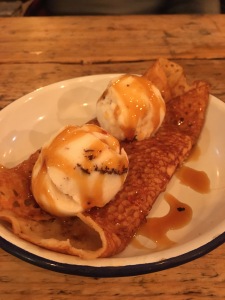 The pancake isn’t overly sweet, kind like a thin flat crumpet, crispy on the bottom and soft on top, but then it’s smothered in the super sweet sticky treacle, for a deliciously indulgent delight. It was served with their vegan stracciatella, which is a beautiful light and creamy coconut ice cream with chocolate rippled through. That cleanses the palette, balancing out the dessert so it’s not too sickly. This was a wonderful end to the meal.

I love everything about The Coconut Tree experience. The staff are always so welcoming and friendly, talking you through the menu if you haven’t been before, happy to give recommendations, and just generally make sure you’re as comfortable as possible. The atmosphere is just right, laid back but buzzy – I’d recommend booking in advance if you want to guarantee yourself a table as it always seems pretty popular in the evenings. The cocktails and food are just about perfect. If you haven’t already tried it there, what are you waiting for?!

This meal was complimentary; the review is an honest account of the experience.