A glance at the menu of recently-opened The Coconut Tree on St. Clements suggests it’s a relative haven for vegans. With no less than 16 vegan dishes, visiting was one of those rare occasions a vegan finds themselves in the position of having too much choice. With a lot of Sri Lankan food naturally being vegan, the street food concept at the restaurant means diners can experience a handful of the different home-cooked style dishes at a budget-friendly price. I booked a table for a Friday evening with a friend, and we must have taken 45 minutes choosing what to order due to it all sounding so delicious – we felt a little guilty at having to repeatedly ask the very patient waiters for a few more minutes to decide! 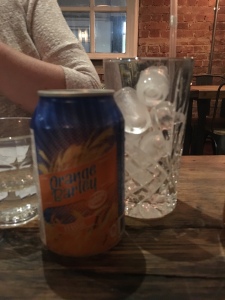 We did manage to choose our drinks at least (after only a marginally longer time than it would take a normal person). My friend ordered the Sri Lankan orange barley, which came out of a can and looked exactly like Irn Bru (is it an Irn Bru, we both wondered aloud? Neither of us having tried it though unfortunately we couldn’t tell you). It was sweet and refreshing – nice, but I probably wouldn’t pay £3 for it next time. I decided to go for the Wood Apple Necta as it was completely new to me, and indeed it tasted like nothing I’ve quite tried before. The waiter explained it’s a large fruit with a very hard shell which would usually be opened up and the fruit eaten scooped straight out of the shell. This drink is the fruit’s juice, and was very sweet, I couldn’t compare it to anything you’d regularly find in your fruit bowl. The texture was quite thick and smoothie-like, and I did ask whether there was any dairy in it because it looked suspiciously like it had cream mixed in, but I was assured not. I really enjoyed the drink, I just can’t put my finger on a similar flavour!

Our waiter recommended three dishes per person for a filling evening meal, which seemed about right. He told us all the food comes mild as standard but you can ask for them to ramp up the heat to either ‘spicy’, or ‘Sri Lankan’. We both like a bit of spice so we said we’d be happy for them to add some to our food. I’m glad we did as I think it meant we experienced the food closer to the traditional way it would be cooked, though the five Sri Lankan boys behind the concept say it’s not necessarily all about the heat, but the combination of spices and natural flavours.

We were both able to agree pretty quickly first that we wanted to order a potato spring, which sounded great on the menu but also smelled and looked yummy when we saw one arriving at the table next to us. It’s basically a potato cut into a giant spring shape on a skewer, served with a tomato salsa on the side. Deliciously spiced and salty, it was like a cross between fries and crisps. I’d happily eat one to myself next time.

I love a good dhal and Daisy mentioned she’d had a lentil craving recently (as you do…) so we also opted for the parippu, a thick Sri Lankan red lentil dhal cooked in coconut cream. It was spicy but creamy at the same time so really nicely balanced. Also an excellent portion size for the price.

The most expensive dish we ordered was the cashew nuts, which was a delicious, creamy, lightly spiced cashew curry. I would definitely order this again as the level of spice and the flavours were perfect, though next time I’d probably go for some rice or rotti to soak up the delicious sauce with, as a lot of the things we chose were quite liquid. I found myself chewing on some large pieces of lemongrass as I was tucking in, which I’d probably look out for next time to pick out as it was very strong, but I was just enjoying the food so much I wasn’t paying too much attention!

We also ordered the stiry-friend chickpeas, which were well-seasoned and cooked in coconut oil with plenty of crushed chilli. They were fairly salty, and heavy on the onion and garlic which is what I like to see (as with the rest of the meal actually – I definitely noticed that when I got home)!

I will always love battered mushrooms but it’s nice to try some with a spicy twist. The ones served here were also a far cry from the average soggy beer battered thing you might find at a chain pub. They were nicely cooked, salty, and flavoursome. They were also topped with lovely crispy pieces of caramelised onion. It started off deliciously sweet, then all of a sudden the heat kicks in, and my goodness that was definitely the spiciest thing we ate. I had a mouthful of it first and almost felt guilty at goading my friend on to try it afterwards. I would say the heat didn’t take away from the flavour which was enjoyable, but neither of us were brave enough to eat any more of it. 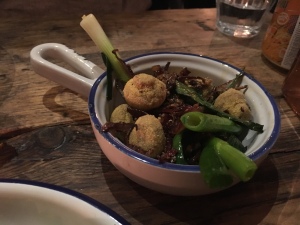 The vegan kotthu is labelled on the menu as one of the larger dishes, and did come in a slightly larger bowl than the others. Apparently it’s served right across Sri Lanka as luxury street food, and consists of stir fried vegetables mixed with chopped up rotti. This one was a bit disappointing for us compared to some of the other things we tried. It didn’t seem to be packed with as much flavour as the other dishes and actually reminded both of us a bit of those stir fry veg packs you buy in a meal deal from supermarkets. The addition of the rotti mixed throughout was nice though, next time I’d probably just order a portion of the flatbread on its own along with another of the veggie small plates.

We knew we couldn’t leave without dessert, though here there is only one vegan option on the menu. The vegan stracciatella came as a generous portion of mildly coconutty ice cream, with dark chocolate shards rippled through. This was a deliciously creamy way to end the spicy meal. I think a lot of the savoury food served up is naturally plant-based but it’s so nice to see that they considered and included a vegan pudding too.

I’m really keen to go back and try some of the many other interesting vegan dishes on The Coconut Tree’s menu. The restaurant has a great vibe which genuinely added a lot to our enjoyment of the meal. The staff were really enthusiastic and knowledgeable about the menu, chatty and friendly, and the evening was perfectly paced in terms of the drinks and food arriving. They also didn’t seem to mind us taking up a table in there for a whole four hours! Our meal for two including drinks came to just over £35 and I think that was really decent value for a nice Friday evening out. If you’re so inclined you can get two cocktails for £10 which I thought was a pretty good deal too. There were plenty of tables reserved for different times throughout the night but for a Friday evening it still wasn’t overly crowded – hopefully as more and more people discover this place they will go out of their way to head up St Clements and explore the menu.

We dined as guests of The Coconut Tree.

I wrote this guest post for OXFORDABLE. OXFORDABLE is the ‘go-to’ place for local residents, tourists and students to find out where to eat, sleep, drink and find things to do in Oxford and Oxfordshire. Read the original post.