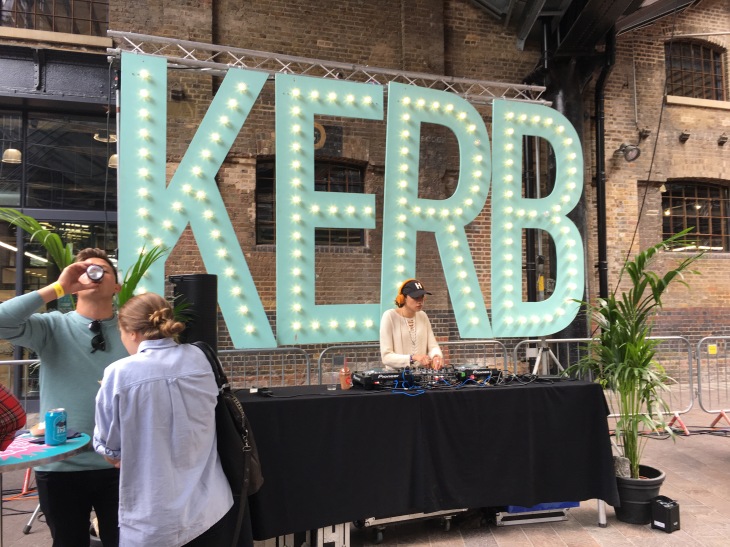 As you might have gathered from my Wilderness Festival food round-up, I love street food. I love the passion and care that food truck owners clearly have for their food, and really admire them for cooking up what are often beautiful dishes with lots of different elements, in the tiniest of kitchens under pressured circumstances (i.e. snaking queues of hungry customers). With this in mind, when I saw that street food market Kerb were running their first ever vegan street food battle at Kings Cross, I snapped up a couple of early bird tickets for myself and my sister. For just £25 per head, we were able to indulge in a sample of the finest vegan street food from each of the eight different vendors, before casting a vote on which we thought served up the most impressive dish. They even threw in a free drink with the ticket for good measure. We arrived at Livin’ on the Veg at West Handyside Canopy at 12.30pm while many of the throngs of people had still yet to arrive, so we had the pick of shorter queues at the food stands. With our stomachs rumbling, we started our culinary journey…

Proudly advertising their ‘filthy junk food’, Biff’s Jack Shack were serving up jackfruit wings served with a maple bourbon hot sauce, blue cheeze, and a kale slaw. Breaded and served with a sugarcane ‘bone’, the wings are a pretty decent alternative to something you might find at KFC – though tasting better in my opinion, knowing that nothing was needlessly slaughtered for it to get to your plate. The jackfruit was really well seasoned, and the breadcrumb coating was super crispy, and together tasted delicious, though the texture of the meat itself wasn’t quite the same as a chicken wing. The cheeze really was quite close to the real thing, and the hot sauce was flavourful but didn’t blow your head off. The slaw was nice enough but there was so little of it that it was a bit of a non-event next to the wing. As this was the first food stand we visited though, we were off to a great start.

I was very excited to see the people notorious for attracting queues winding down the streets of Hackney when their vegan chicken shop opened were bringing their goods to Kerb. This was my first time trying their seitan-based mock meat, in the form of a slider with an agave mustard glaze. Man was it worth the wait. Topped with a pickle, the tang of which cut through the sticky sweet sauce, the texture was scarily close to chicken, and they’ve nailed the seasoning too. Vegan junk food at its best.

Lemlem Kitchen was one of three vendors at the event that aren’t solely vegan traders, though they were only serving their vegan option here of course. On the menu was a timtimo split pea afro-taco, served on a spongy injera taco and topped with slaw. Their tacos are obviously put together with care and it looked really pretty in the tray. I enjoyed the flatbread and the mixture of textures, but although there were lots of different elements to the dish, the slaw had a really strong aromatic flavour which slightly overpowered everything for me.

Eat Chay served up a Korean BBQ Bahn Mi baguette which was filled with seitan, pate, pickle, and mayo. The crispy seitan slices between the crusty bread were really tasty (although I reckon Lucy got more in her baguette than me!), though there was a lot of coriander in the sandwich which I think could’ve been toned down slightly. Combined with the sauces though this had all the elements of a perfect sandwich. I hope to try a full sized baguette from Eat Chay sometime soon!

I’d come across Spice Box at a couple of events I’d attended in the past, and their food always seem so enticing – plant-powered curries packed with flavour. For Livin’ on the Veg, they offered up charred tandoori cauliflower, with pickles and coriander chutney, served on a grilled naan bread. First thing to say, I freaking love naan bread, and I’m so sad that the ones you order from a takeaway aren’t vegan. Clearly there’s no reason they shouldn’t be, because this naan was delicious. But the star of the dish was of course that grilled cauliflower, perfectly spiced and smothered in a sweet, creamy makhani gravy. The chutney and pickle also added a nice hit of acidity. Can’t go wrong with curry cooked like this!

Next we went for the thai curry on offer from Greedy Khao. The red curry sauce was very sweet but still had a decent kick to it, and was served on a bed of well-cooked rice. The curry featured tender chunks of butternut squash and yummy tofu puffs. The crispy onions on the top gave a nice bit of crunch to the otherwise fairly soft dish. We ate a lot of slaws that day and we crowned this one the winner, again adding some texture and with the flavours really nicely balanced and refreshing against the creamy curry. Extra points for the cute boat it was served in too.

Six vendors in and our stomachs were starting to get rather full. Petare had had the longest queue all afternoon, so after a little break at the potato-head making station (where we failed to make even one potato print come out in a recogniseable shape), we decided to join the end of the line for our seventh portion of food. The menu featured a ‘chip butty’: an arepa filled with cassava chips, fried plantain, guacamole, and ‘feta’ cheese. There were lots more staff behind the counter than at any of the other vendors from what I could see, and they seemed to be struggling a little keeping up with the pace. What was served up was a bit greasy and pretty hard to eat without getting it everywhere because there was so much filling, but the combination of the salty chips and sweet plantain was truly yummy. The cheese was amazing too, probably the closest thing to real cheese I’ve ever tasted since going vegan. Our arepas were a bit soggy in the middle, perhaps from the wetness of the filling but it almost seemed like the dough was a bit underdone. Lucy wasn’t keen and didn’t actually finish hers, but I quite enjoyed it, it wasn’t like anything I’ve eaten before and I really enjoyed the flavours. 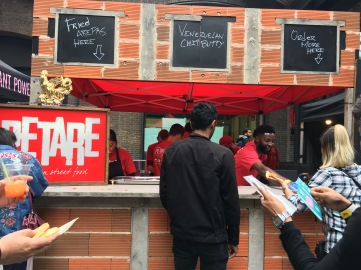 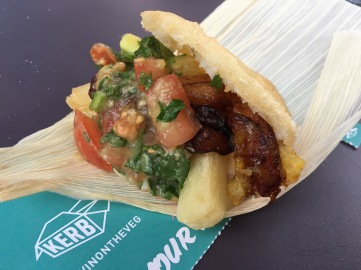 Peanut butter and chocolate. Can’t go wrong really, can you? Although both mine and Lucy’s experience with vegan baking tells us that actually, you can, but this mud pie from Young Vegans was absolutely spot on. It was almost still batter in the middle, super gooey, and I know everyone has their preference of how long they like their brownie cooked, but for me this was perfect. The generously sized salty peanut butter swirl lifted the sickly chocolate, and the small scoop of vanilla ice cream (Swedish Glace) and chocolate shavings perfectly finished off the dish. I will admit that the last mouthful really finished me off, it was a fairly large portion size compared to some of the other vendors and after all that food it was quite a heavy dish to finish off with. I’ve had pie and mash from Young Vegans before at a Vegan Festival which was delicious, so I didn’t really expect anything less than delicious from them, and they didn’t disappoint. What a great way to finish off an afternoon of indulgence.

But who won our vote?

Both Lucy and I voted for Temple of Seitan. The Young Vegans’ brownie was really fantastic and came a close second for me, but I felt that it was hard to compare that one sweet dish with seven savoury, and as I have less of a sweet tooth, I went for the ‘chicken’. In fact though, Petare won the most votes from Kerb’s visitors and were awarded the Golden Carrot for wowing the crowds with their chip butties, with Temple of Seitan coming in second. I’m sure all the vendors were really proud of the food they served up though, an amazing effort was put in by all. Shout out to the organisers too for putting on such a smooth-running and truly enjoyable event – I can’t wait until the next one!

Did you go to Livin’ on the Veg, or have you been to something similar? Who are your favourite street food vendors? Let me know in the comments!

Starting to think I should compile a review of vegan sausages 🤔 every other post on my feed seems to have them in 😂 but I promise we don’t actually have them that regularly!
That crispy fried tofu 😱 tried out the new(ish) @sainsburys organic extra firm tofu for this fajita bowl and it came out great with minimal pressing time! 🙌
Is it ever too hot for a roast dinner? No in my opinion but let me know your thoughts in the comments 😆
It’s warm 🥵 last nights dinner was a plate of @oddboxldn veggies thrown together with olive oil, garlic 🧄 chilli flakes 🌶 nuts and seeds 🥜 and some pulses 😋 whenever I don’t know what to cook I fall back on a stir fry 😆 anyone else?
Shout out to @squeakybeanveg for making some of the best vegan products around 🙌 have you tried any of their stuff? Send me your recommendations ⬇️
I knoww I post fry ups all the time but aren’t they one of the best meals, anytime of day? 😋