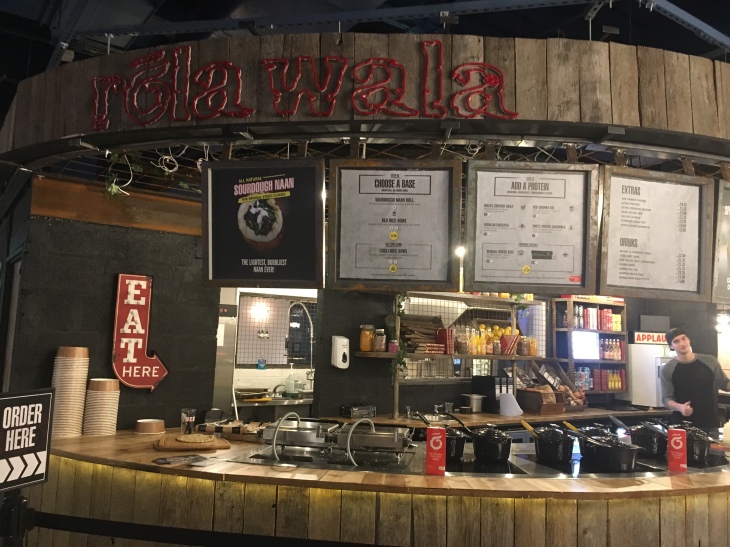 Rola Wala has officially firmly replaced Leon as my go-to great value healthy ‘fast food’ option in town. Having tried some of the other fast food vendors in Westgate Social already and been particularly underwhelmed (more to come on that sometime soon), I wasn’t really sure what to expect from Rola Wala, but felt optimistic having looked at their London menu online before the Oxford launch. With more than half of the food on offer being vegan, they serve up rolls and bowls packed with nutrients, and as I discovered, most importantly with flavour.

I met with founder Mark Wright during Rola Wala’s opening week to talk about their vegan offering and was lucky enough to get a taste of everything they have on offer. I asked him whether it was always the intention to cater equally for vegans, and his response was one that I wish all restaurateurs would take note of. When Rola Wala first started out as a street food stall, they had just two dishes on the menu, one meat-based, and one lentil dal. They played around with the recipe and added paneer to the dal, but found that a lot of potential customers weren’t buying because of this one ingredient. As they expanded and developed their menu they continued to experience people choosing not to buy a meal from them because of one ingredient in a dish, whether it was cheese, or a bit of yoghurt. This got them thinking – if they could adapt a recipe to remove that ingredient, crucially without it impacting the great quality and flavour of the dish, and that made it accessible to many more people, then why wouldn’t they? I’m sure this is exactly what vegans in supermarkets the world over are thinking every time they read the hideous words ‘milk powder’ on the back of packaging. So here Rola Wala are today with certainly the best vegan offering in Westgate Social and probably one of the top in the city centre in general. 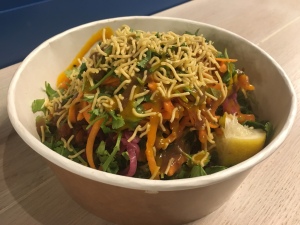 Diners can choose from three bases for their meal: a sourdough naan, Sri Lankan red rice, or cauli-rice, all of which are vegan-friendly, and then add their chosen protein. Mark made me up a mixed bowl himself so I could try a bit of everything. The recipes were inspired by his travels in India, and designed in an (I think successful) attempt to re-brand what British people think of as ‘Indian food’ – no creamy, fatty curries or sides here. He clearly knows the menu like the back of his hand and really cares about the food that’s served at the street food joint, something I couldn’t necessarily say about the other establishments in the food court. For 95p extra you can opt for the low-carb cauli rice, and whichever protein you add to it, your meal will come in under 500 calories. I was interested to try this because I’ve attempted to make cauli-rice a couple of times at home myself to little success. I’m also all about the carbs. While I would probably never choose this option myself (more money for less calories?!) this base was so much tastier than cauliflower rice I’ve had before. It has kale and turmeric mixed through to add more flavour, and is pulsed to different sizes, retaining some texture, and certainly not cooked down to a mush as I have probably done myself. In the other half of my bowl I had the nutty red rice, also a very nutritious option, containing up to 75% more fibre than regular rice. 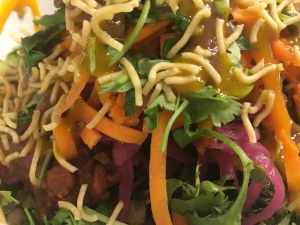 There are three vegan protein options, putting all those questions about where we get our protein from to bed. In my bowl I had the slow-cooked greens and sweet potato saagwala, which almost melts in the mouth, and is warm and aromatic. This was probably my favourite of the three protein toppings I tried, it tasted great and the spinach and kale mixture is obviously packed with nutrients. On the other half of my bowl was the red channa dal, a twist on a traditional dal recipe with beetroot mixed through, as well as cinnamon and clove, leaving you with a sweet, comforting dish, perfect for these winter months. 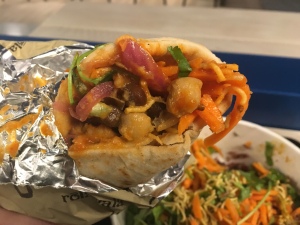 In the naan roll, I tried the keralan chickpea filling. Firstly this was incredibly enjoyable as I sadly eat naan bread so rarely now, not tending to shop at places that sell a vegan version. The sourdough gives the roll a really interesting flavour too, and I was reliably informed by Mark that theirs was the world’s first ever sourdough naan recipe to be developed and put on a menu. It’s the perfect carrier to bring out all the flavours inside the wrap. The mild chickpea mixture comes with sweet potato and a coconut and tamarind sauce. At just under £6 for this filling, tasty meal, I was thoroughly impressed.

Along with your bowl or roll you’re offered a choice of salad and dressings. Mark hopes customers don’t turn down any of the salad options, as to remove any one of them affects the balance of the dish, and I would agree that your meal would be missing something if you don’t go for everything that’s available. The acidity of the lightly pickled onion offers a nice contrast to the sweetness of some of the fillings. There’s also fresh grated carrot tossed with turmeric and onion seeds, and sev, crunchy gluten-free strands of chickpea flour, which add texture. Finally everything is topped off with a squeeze of leamon and a very generous handful of coriander, which I know can be a controversial herb, but it’s the perfect garnish for these dishes.

Lastly, the bowl or roll is topped with chutney for a bit more spice. Currently only the mild and hot chutneys are vegan, as the medium one contains yoghurt, but I was told that in a couple of weeks they are replacing that with an updated vegan-friendly recipe too (though definitely check with your server when ordering – they seemed very knowledgeable about the food). Great news for people who do like a bit of spice but can’t tolerate too much. The sweet mango and ginger sauce is a crowd-pleaser, but my favourite was the sour but mild pear and tamarind chutney. The hottest chutney brings a heat to the back of your throat which sits there for a while but doesn’t blow your head off, so you can taste all the flavours along with the spice. Everything is tossed in together, so with each bite you get a bit of everything for the full flavour experience. 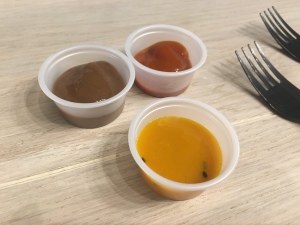 Rola Wala have also developed their own drink, a mango and turmeric soda, great for cleansing the palette. It’s refreshing, lightly sparkling (which is good for me as fizzy drinks and I often don’t get on) and the turmeric is good for digestion. Top tip, pull the tab on the lid out and then up, because I overheard customers having trouble getting into their drink – an issue with the packaging which they hope to have fixed soon. Worth battling your way through the bottle cap anyway because it was very nice, and you won’t find it anywhere else! 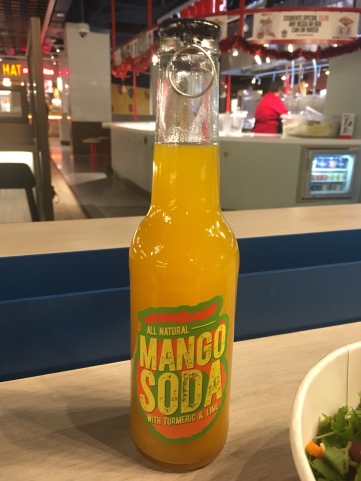 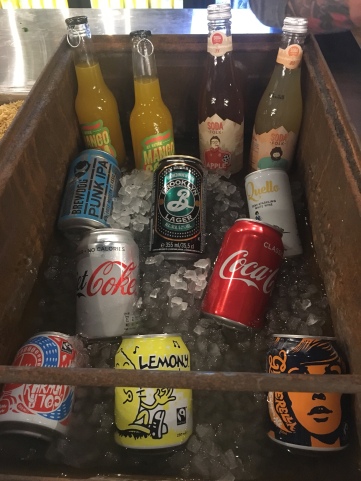 I was invited back to Rola Wala to try their brand new addition to the menu, the Vegan Rebel ‘Spice’ Bowl, launched in time for Veganuary 2018, and perfect for those of us who overindulged a little over the festive period. For £7.25, you get a flavour packed bowl packing 30+ grams of protein. The base consists of black bean noodles (in a tiny bit of oil so they don’t go all sticky), topped with a few pieces of deliciously charred broccoli, roasted in turmeric and chilli. This is then piled with any of the vegan toppings of your choosing, leaving you with a big, filling bowl of deliciousness. 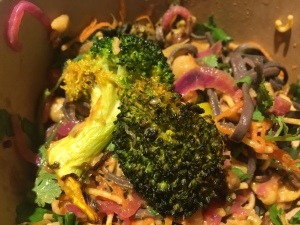 Another of the fab things about eating at Rola Wala is that not only is it pretty good for you compared to a lot of food you’ll eat out, but it’s good for others too. Rola Wala are partnered with One Feeds Two, which means for every meal you buy, they give a meal to a hungry child living in poverty. I really love this concept and the fact that Rola Wala were one of the first businesses to support the initiative, and continue to do so as they grow and expand to further locations. Though perhaps not purely altruistically, I think I’m going to become a regular.

Disclaimer: Rola Wala invited me to try a taste of all their vegan food free of charge in their opening week. I did however return the next day as a paying customer! This review is my honest opinion of their food.

Some of you weren’t happy with the crumpets in our breakfast for dinner last week 😂 we had no bread okay. Is this really that bad? Let me know if you feel strongly about this in the comments 🙈
Lovee a mezze platter 😍
Got out of bed at 11.30am today 😴 maybe let’s all just sleep our way out of this lockdown, it’ll go quicker 🤷‍♀️
Not particularly in keeping with the junk food vibes of my feed these days but this is how I eat when I’m cooking for one 😆
Hands up if this is the most beige/orange roast dinner you’ve ever seen 😂
Quick and simple lunch idea while we still #StayAtHome 🤷‍♀️