Towards the end of Cowley Road (opposite Atomic Diner), a magical place has appeared to provide a home for the Oxford vegan community. Happy Friday Kitchen is the city’s first fully vegan restaurant, and I think it’s safe to say it’s about time.

I had been eagerly checking out HFK’s Instagram feed on a daily basis in the lead up to the restaurant opening, and though I hadn’t seen the full menu, I was already pretty sure what I was going to order (I have to admit it was a tough decision, not being used to having quite so much choice)! We were seated by a super friendly waiter and told that once we’d checked out the menu we should order and pay at the counter. Happy Friday Kitchen is really casual and laid back, and I’m almost not sure whether I would call it a restaurant in that sense, though the food is certainly up to scratch and worth the restaurant prices. The food is American diner-style, and there’s no escaping that you are probably going to get your hands dirty and sauce all over you. If anything this adds to the enjoyment though, and I’m confident that any non-vegans who visit aren’t going to feel that they’re missing out on anything. 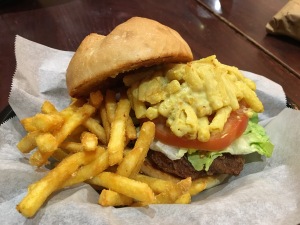 I decided on the Mac Daddy, a fried chicken-style seitan burger, topped with mac ’n’ cheese, in a bun with salad and fries on the side. The seitan burger was perfectly crispy on the outside and the texture was pretty accurate to what you expect from a chicken burger. The seasoning was spot on too, and it was one of the tastiest things I’ve eaten in a while – world’s away from the awful Byron Burger I had not long previously. The mac and cheese wasn’t overly ‘cheesy’ but its addition to the burger made it the most deliciously comforting meal. The fries were cooked exactly how I like them, fresh and crisp, not a soggy chip in sight. The whole meal transported me to a place of happiness. The only thing I would say was that the chef was a little heavy handed with the salt in everything for my tastes. I know that American diner food typically would be very salty, though my diet mostly consists of quite plain, simple wholefoods, so perhaps my taste-buds just aren’t accustomed to it. In any case, it didn’t particularly lessen my enjoyment of the food, I just found I needed to drink a lot of water.

Jamie ordered the American Joy Burger, also seitan chicken, but this time topped with buffalo sauce, salad, and a slice of vegan cheddar. I tried a bit of his burger and wow did that sauce have a kick to it. There was quite a thick layer of it on top of the burger so there was no avoiding the spice. It tasted similarly great to my own burger but I thought they could consider having a chilli symbol or something marked on the menu to warn people, as we definitely didn’t expect it to be quite so hot. Jamie agreed it was like something he’d get from his local chicken shop (a compliment, he loves going there – sadly). Maybe one day I’ll convert him!

To finish off our meal, we shared a couple of Lola’s yummy-looking baked goods, her own creations fresh from that morning. There were literally only a handful left after Happy Friday Kitchen’s first day trading, so I bought them while we were waiting for our meals to arrive in case they sold out. I suspect the sweet treats on offer will change regularly, but we tried one of the beautiful mermaid cupcakes, and an oreo marshmallow brownie. The vanilla cupcake was baked perfectly and had just the right ratio of icing to cake for us, as well as looking very cute. The brownie was deliciously fudgy, chocolatey and indulgent. Also on offer was a white chocolate oreo rocky road, but sadly our stomachs couldn’t quite cope with three cakes between us after our mains. Perhaps Jamie would disagree, but I felt I had the perfect amount of food.

Happy Friday Kitchen is a little vegan haven, and through the back of the restaurant you can stock up on your favourite vegan goodies, including Ananda’s Marshmallows, Vego bars, iChoc, and Vivani (all up there among my top vegan chocolate brands). You can fill up a cup with vegan sweets from the pic’n’mix stand on the back wall, and even grab yourself a t-shirt featuring the cute Happy Friday Kitchen logo. I really hope vegans near and far will come and support this local independent business. I loved it so much that I made another booking the next day to try some of the other stuff on the menu! It is an indulgence and probably not good for your waistline, but you’ve got to allow yourself a treat every once in a while and this is certainly that.

If you’re interested in my thoughts and photos of even more of Happy Friday Kitchen’s delicious food, check the recent review on Bitten Oxford. 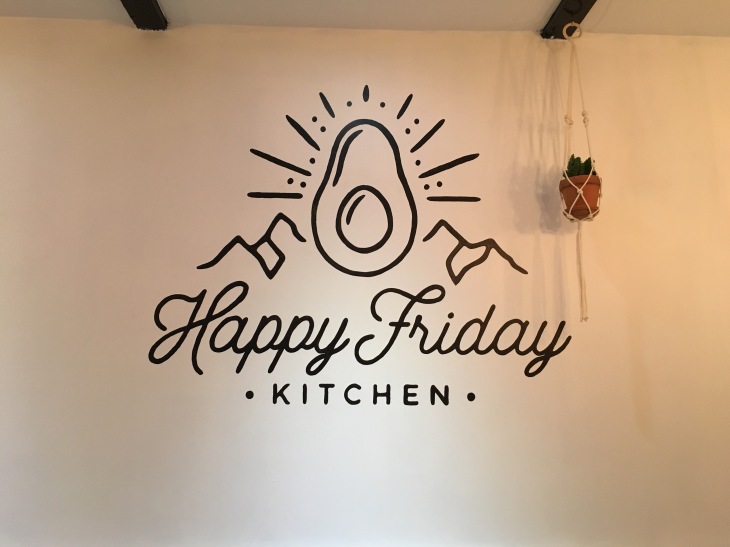