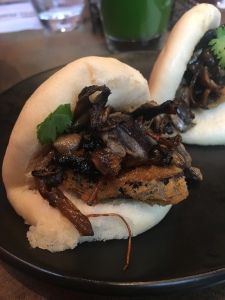 Wagamama officially has the most space dedicated to it on Vegan Eats Oxford! It’s a sure sign that it’s one of our faves, and has an abundance of vegan options. I was very kindly invited by the Oxford restaurant’s brilliant Sous Chef, Anthony, to come and visit again following the recent refresh of their menu. They’ve finally separated the vegan options out onto their own separate menu (having previously shared with veggie stuff), and adapted even more of their dishes so they’re vegan-friendly.

Wagamama is definitely one of those places that’s great to go for a chilled meal with a larger group of people. I know some people don’t enjoy the fact that all the plates come out at different times, but I find it a really social place to get a meal, where you’re going just as much to enjoy good company as to enjoy good food (of which we had plenty of both on this particular visit)! 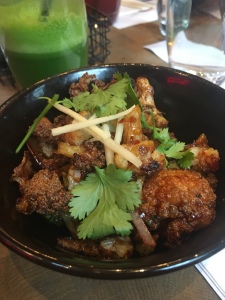 We decided to share a bunch of sides between the group, some of which I’d tried before, but I was looking forward to finally tasting the Bang Bang cauliflower, newly veganised, having previously only been vegetarian and I’d heard great things. It had a decent kick but wasn’t too spicy, and the bitter charred cauliflower had retained a bit of texture, though it fell apart in the mouth. Overall a delicious experience. We also split a couple of mushroom bao buns between us which previous readers may already know is my favourite wagamama dish. The fluffy bread buns are like clouds and the crisp, mushroom filling is bursting with flavour, then you have a proper crunch from the coating on the fried aubergine. I could eat these all day, and maybe sometime I’ll attempt to! 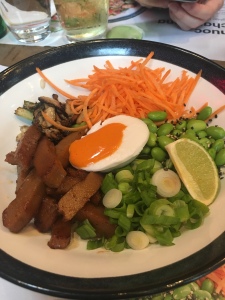 For my main, I had to try the new Avant Gard’n, as I’d been seeing it all over Instagram for some time, since it had been trialled at Wagamama Noodle Lab in Soho for a while before being introduced country-wide. It’s one of those dishes which you know was created with Instagram in mind (although I admit my photography makes it look pretty un-instagrammable). The vegan ‘egg’ split opinions in our group. It’s pretty ingenious but the fact that it’s made from coconut confuses your tastebuds a bit! Some people who had a taste really enjoyed it, though I would love to see something that actually tasted a bit more ‘eggy’. The seitan was really flavourful, with a pleasant texture, with the mushrooms also adding to the ‘meatiness’ of the dish. There were plenty of fresh veggies on the plate, along with a generous portion of rice, and it felt like a very well-balanced meal nutrition-wise. I have to say it’s not my favourite dish on the menu as there are so many others packed with flavour that are on offer, but I love Avant-Garde Vegan and I was not disappointed by this bowl! 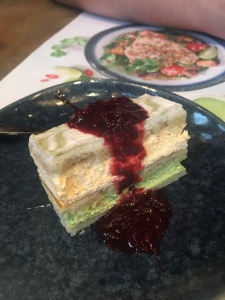 Having left a little room, we still managed to explore the dessert menu – there are three new vegan puddings, including *finally* a cake! The mango and matcha layer cake looked a little sad on the plate as it was leaning over to one side, but when I took a bite I wish I was eating a whole one to myself rather than sharing it with Jamie! The flavours are so perfectly balanced with soft vanilla sponge, sweet matcha and yuzu cream, then a tangy and refreshing mango and passionfruit purée centre. The spoon melted through the dessert and it was a delight to eat. Looks like I’ll be ordering this every time I go to Waga’s from now on! So happy wagamama have stepped up their game on the dessert front.

I thought it was definitely worth mentioning in addition to the wonderful food and service that we received, one of my friends had very recently been instructed by her doctor to go on a Low FODMAP diet and the staff were so accommodating, noting down everything she couldn’t eat – Anthony even offered to chop some fresh leek as she could only eat the green part but not the white! We were super impressed with all the staff’s attentiveness to this and I’d recommend wagamama to anyone with allergies as they also have a really accessible allergen guide.

Wagamama will continue to be one of my staple quick/healthy/good value restaurants of choice, as it ticks all the boxes. Thanks to Anthony and the team for having us! Has anyone else here tried the new cake or Avant-Gard’n bowl? What did you think? 😛